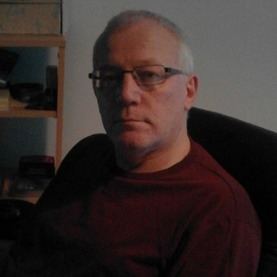 On 1st February 2017, Tony signed to Bloodhound Books, who published his new edgy crime thriller Bad to the Bone on Saturday 29 April. It features DI James Bliss and DC Penny Chandler, and is the first in a series.

Tony Forder has been writing stories since childhood, but it was only when he won a short story competition judged by an editor from Pan Books, that he realised he might actually be half decent at this writing business.

During a book signing for Dark Voices 2, Tony was seated next to author Brian Lumley. At one point, Tony revealed to Brian that he felt out of place alongside all the proper writers. Brian then told Tony something he has never forgotten: "The moment you sat down and pulled a story out of your imagination and put it to paper, you became a proper writer."

Subsequently, Tony began to focus on novel writing. He admits that his initial attempts were exploratory and somewhat derivative, although there was some interest from an agent – who oddly enough turned out to be Brian Lumley's wife, Dorothy.

Tony wrote Degrees of Darkness, which he was happy with. He wasn't so happy with a follow-up, so that never saw the light of day.

As a part-time writer with a full-time job, plus some ill-health, life got in the way and, although Tony continued writing, it took a back seat to making a living.

This year, however, Tony has been inspired by new ideas, and has been working hard on two new books, at least one of which will be completed in 2017. In the meantime, he hopes you enjoy Bad to the Bone.

Bad To The Bone