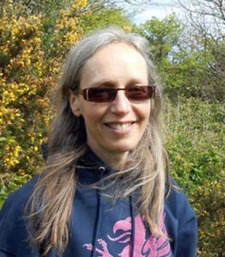 Sarah Potter's writing career began at school, when she penned lengthy pop-star romances and science fiction stories for her fellow students' entertainment instead of doing any work. Later, at night school, a famous horror author awarded her the class prize for writing the scariest opening to a novel. In 2010, she reached the finals in the fiction category of the Aesthetica Creative Works Competition with a dystopian romance between a beggar who had made himself intentionally legless and a girl with bad skin.

She blames her more offbeat and unhinged literary characters on her time of working in psychiatry. Her earlier jobs included kennel maid, serving in a pub, shop assistant, factory worker, and secretary, all of which proved valuable life experience; however, anything that involved mathematical calculation or the operation of money tills did not last long.

Nowadays, Sarah concentrates on her novel writing full-time. She also loves to encourage others in their creative endeavours. This includes running a once-monthly guest-storyteller slot to showcase the work of fellow authors on her blog.

She lives with her husband, son, and chocolate Labrador in a house with panoramic views over the English Channel. When not writing novels, she pens haiku and tanka poems, takes nature photographs, grapples with bindweed and snails in the garden, invents recipes, and sings mezzo-soprano.

Noah Padgett and the Dog-People