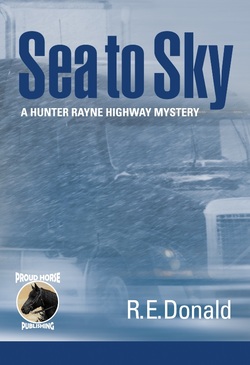 During what was supposed to be a few days of skiing at the Whistler Mountain resort with an attractive female acquaintance, former homicide detective Hunter Rayne finds himself the prime suspect in the RCMP's hunt for "The Chairlift Killer".  Hunter has no choice but to get involved in the investigation in order to clear his name.

Meanwhile, trucker Hunter was scheduled to haul a load of freight to Northern California, so he calls up his old friend, biker Dan Sorenson, to take his place behind the wheel. What connects the badass biker from Yreka, California to the most prolific female serial killer in US history? And what happens when dispatcher El Watson ignores Hunter's warning and sends the biker on a search for clues to the motive behind the murder?

In the midst of the investigation, Hunter's life gets complicated when the progress of his new relationship is hampered by the appearance of a woman from his troubled past.

Sea to Sky is the third novel in the Hunter Rayne highway mystery series.

Slow Curve on the Coquihalla 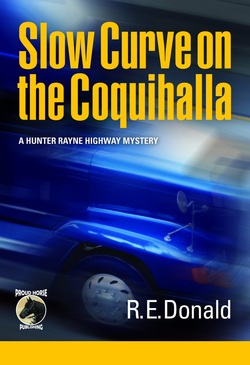 When a well-respected truck driver, the owner of a family trucking business, is found dead in his truck down a steep embankment along the Coquihalla highway that winds through the mountains in British Columbia, his distraught daughter wants to know how and why he died. Not long afterwards, while driving the same highway, her husband’s brakes are tampered with, almost creating another fatal accident on a treacherous incline, This compels Hunter Rayne, a fellow trucker and retired RCMP detective, to help her find answers.

As he uncovers signs of illegal cross border activity originating in a Seattle warehouse, Hunter recruits an old friend, an outlaw biker, to infiltrate what appears to be an international smuggling ring. But while Hunter follows up clues and waits for critical information from his old friend, the wily biker starts to play his own angles.

Finally, putting all the pieces together, there in the dark on the same uphill curve on the Coquihalla highway, Hunter risks it all to confront the murderer.

Slow Curve on the Coquihalla is the first in a traditional mystery series featuring "semi-" professional sleuth, Hunter Rayne. After serving over 20 years in the Royal Canadian Mounted Police and becoming a skilled detective, Hunter resigned from the force and took to the road as a long haul trucker. His ex-wife is convinced he is running away from the personal tragedy that made him leave a job he loved. Hunter himself doesn’t know why, he only knows he has to keep following the white lines.

Ice on the Grapevine 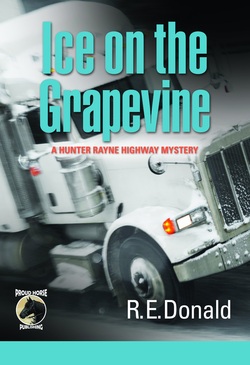 Ice on the Grapevine is a traditional mystery featuring Hunter Rayne, a retired homicide detective turned long haul truck driver. The story opens on a July morning with the discovery of a frozen corpse at a brake check just south of the Grapevine Pass in L.A. County. Hunter, who is in southern California making a delivery, is persuaded by his irascible dispatcher, Elspeth Watson, to help clear two fellow truck drivers who are arrested for the murder. His job is made more difficult by the fact that the suspects, a newlywed couple, won't speak up in their own defence.

The circumstantial evidence is strong, and a rookie detective from the L.A. County Sheriff's Department is eager to score a win. The investigation crosses the Canada-U.S. border when the victim is identified as a second rate musician from Vancouver, and it turns out there were more than a few desperate people happy to see him dead, including the accused couple. Hunter has to use all his investigative skills to uncover the truth.

Hunter’s ex-wife maintains that by taking to the highway Hunter is running away from his past, but he believes that the solitude of days on the road is helping him to heal from guilt over the failure of his marriage and the suicide of his best friend. His life gets more complicated when he feels an unwelcome attraction for a lawyer representing one of the accused.

Tangled relationships and multiple suspects emerge throughout the novel, as Hunter butts heads with more than one officer of the law to solve the crime.

Sundown On Top of the World 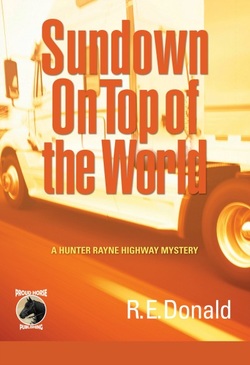 Former homicide investigator Hunter Rayne follows the white lines northward on the Alaska Highway, but a truck breakdown forces him to take an unscheduled stop in Whitehorse, Yukon, where he had been stationed as a rookie cop. While his Freightliner is awaiting repairs, Hunter and fellow driver, Dan (Sorry) Sorenson, kill time with a side trip to bush Alaska where a chance meeting with a young Alaskan woman awakens his interest in a baffling cold case. A reclusive trapper and his young girlfriend disappeared from a bloody cabin 25 years before, leaving their sled dogs chained outside.

Reawakened memories of his past coupled with a recent murder find Hunter back in investigative mode with the blessings of Whitehorse RCMP boss Bartholomew Sam, son of a shaman and Hunter's old friend. He finds himself searching the banks of the mighty Yukon River for a tough old bush woman who may hold the key to more than one bloody death. It's a vivid reminder that the breathtaking beauty of the northern wilderness camouflages its brutal indifference to human life.

This is the fourth novel in the Highway Mysteries series of character-driven traditional mysteries in a uniquely North American setting. 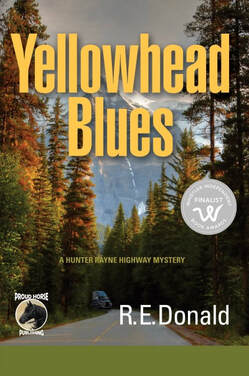 Just west of the Rocky Mountains, a frightened horse with a bloody saddle is found running loose on the Yellowhead highway. Former RCMP investigator Hunter Rayne is on the road in his eighteen-wheeler when he’s flagged down to help calm the horse and find its missing rider.

The horse with the bloody saddle leads Hunter and a good-natured French Canadian cowboy into a complicated murder mystery. The police are none too happy with his interference, but Hunter strongly believes the RCMP has arrested the wrong man and sets out to uncover who stood to gain from the death of a wealthy ranch owner.

His belief in the suspect’s innocence is shared by a rookie female RCMP constable who joins him in the search for the truth. She befriends the dead man’s young fiancé in an effort to get answers, and discovers that the vulnerable Texas beauty is not who the victim's family believes her to be.

This is the fifth novel in a unique mystery series set on the highways of North America.