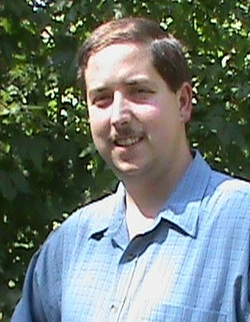 My name is Raymond F. Masters. I am a budding writer, avid comic fan, husband, and a father – not in that order, of course. My inspirations in writing are drawn from what I read, watch, hear, and observe of the “real” world. I come from a loving home and married a great woman. That alone makes me wonder if I’ll ever make it as a great writer. I don’t think you can come from stable environs like that. What do I read? Mainly comics. I’ve read over 6,000 of them to date. Also, I enjoy Star Trek, Stephen King, novels based on comic characters, Greg Rucka’s Atticus Kodiak series, some Grisham, and Secret World Chronicles. Yes, I realize the latter is an audiobook, but I still count it. I catch myself analyzing words and sentence structures in audiobooks the same as I do a prose work, or even a comic book.

Teachers. I cannot say enough about how great an influence teachers have been on me. In fourth grade, I had a teacher give me a coke as a reward from turning a simple story exorcise into an involved poem. It was a turkey poem – the animal, not the country. She shared it with another teacher who attempted to get me published in some kiddie magazine. I didn’t make it, and thus, I received my first rejection. *sigh* Fast forward to my junior year of high school, where I took a couple of college courses at the vocational college in town. Ronnie Thompson in Freshman Comp I wrote at the top of three or four papers that I could be a writer. That’s something I’d like to thank him for someday. Though, to be honest, I’d also like to see if he put that at the top of some of my classmates papers. Hmm, maybe he should’ve just given me a coke. 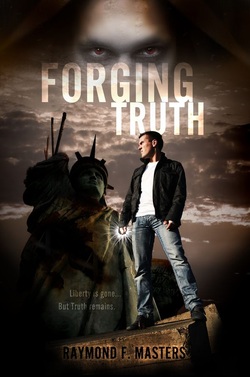 LIBERTY IS GONE, BUT TRUTH REMAINS

Kade Truth awakens in a strange house sideways of reality, where he learns he has “died” in a mysterious attack on the Statue of Liberty. Rather than facing the afterlife, he now wields energy powers, including flight. Kade joins and befriends Caduceus – eccentric caretaker, magician, and feeder of soup – and Mao F’Yang – an intoxicating girl with the uncanny ability to disappear – in a quest to regain his memories, uncover who is behind the attack, and discover why he has been so drastically altered.

In a counter to Kade’s mission, the malign Dark Monk joins forces with Richard Van Parson – arrogant CEO of VPI – to forward his own hellish agenda under the ruse of a retaliatory war.

The question remains, though, if the French government orchestrated the Liberty Island attack, why are our heroes certain of Van Parson’s involvement? What ties does the Dark Monk have with Caduceus? What designs does he have for Kade? And will Kade unravel the truth in time to embrace his true destiny?

Available in Paperback and Kindle at Amazon.com 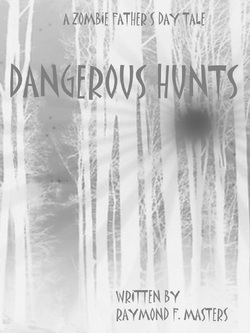 The brochure reads: "Dangerous Hunts: If it moves, you can kill it." But the Carters will soon discover that not everything that moves can be killed.

At his wife's urging, Matthew Carter takes his new step-son on a Father's Day hunt he will not soon forget.

It's open season on the undead, and there's no limit on the amount you can bag.