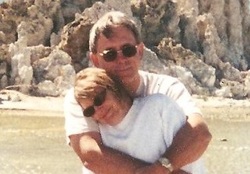 Hi everyone, my name is Ray Jay Perreault. I’m a developing author that has one series called SIMPOC starting release on Amazon and another series Gemini about to begin releasing.

I’ve loved Sci-Fi my entire life and it was likely a contributor to my chosen career path. I went to Arizona State, majoring in Aeronautical Engineering then I was fortunate to fly in the Air Force for almost 10 years. I literally saw the world, flying to 27 countries while flying a great airplane the C-130. The last 5 years of the Air Force I had the thrill of being an instructor pilot in T-38’s, and I was fortunate to be an instructor for the first class of USAF female pilots.

After the AF I enjoyed 28 years working for a major aerospace company and I worked on various projects including the F-23, F-35, VTX, Global Hawk, TSSAM, D-21 Destroyer and finally the B-2 Bomber.

I’ve loved Sci-Fi and for some reason I always think about the ‘other guy’. When the hero is fighting an evil computer, I think what is the computer’s story, how did it begin, why did it turn evil? That is the story behind my first series called SIMPOC.

If the good guys are fighting an evil alien; I wonder what is the alien’s backstory? For some reason I always think part of the story is missing. So, in my writing I’m trying to focus on the other story. My second series is called Gemini and I’ll be creating a backstory for the good guys and bad guys.

Good reading, and don’t let the aliens get ja!