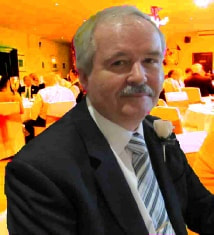 Although I'm a writer, poet and artist, in the literary world my purpose is to support, help, advise and guide other writers and artist in whatever way I can. So far, I've helped other writers with cover design, limited editing, promotion and marketing. If there is anything I can help you with, please get in touch. Oh, you want to know how much this will cost - nothing at all. I don't even expect you to buy one of my books or leave a review, but of course, I'd be grateful for you doing just that!

I've also had a few setbacks and illnesses that have left me a little less abled than I'd like to be.

This is my public profile:: Philip is a former British police officer and lives in England. He has had several unique life experiences, near death encounters, physical disabilities and emotional incidents that have combined to provide a firm foundation for his excellent stories.At the age of 30, after combining an accidental blow to his head with a late night party, Philip survived his first massive stroke. To return to the job he loved proved to be a sometimes amusing, sometimes daunting struggle that took 18 months.With great pride in this achievement, he survived another 11 years as a fully operational, uniformed police sergeant. During this time, he stretched his mind to the limit by studying for a degree. Nine years after that first stroke, everything was put on hold when a younger man took interest in his family, his home but mostly, his wife. Within weeks, his 19 year marriage was at an end, his mind and life collapsed. His inability to cope with the changes left him homeless and estranged from all that he had loved and the daughters he cherished for 18 and 15 years respectively. Despite having no faith, he was encouraged to pray. Amazingly, he discovered that prayer works! Throughout the loneliness and despair of being homeless, prayer sustained him and brought him to a new life, new love, but most of all, a loving and welcoming family that was happy to love him as their own.

It was meant to be a happy ever after ending to the tragedies, but just four weeks after his last exam to give him his degree, and 16 days after his second marriage, injuries sustained through a road accident brought his working life to an abrupt end, just a few years short of reaching his full pension. Undaunted and determined to defy the paralysis, he took up music and art, achieving piano grade 3 and paintings that are quite simply breath-taking. (http://www.philipcatshill.com) As he approached his 60th birthday, Philip, who is still severely disabled, decided to write about that stroke from 30 years before. From that experience, there emerged the fictional character of Mike Newman.

Like this fictional hero, Philip Catshill is the type of guy who never says I can't.

Philip adds: "I'm glad I don't harbour any ill feelings because I think hatred consumes you quicker and more effectively than cancer.Life is for loving. We only have one crack at it and I am determined to enjoy every single minute of all that remains, and I can do that because when I was at my lowest and called out to God in despair, he was there! Prayer works, prayer heals, try it, and persevere with it.
Life is wonderful. Live it. Enjoy it."

One more note: My reduced abilities mean that most employment is no longer an option, thus I have turned my attention to writing and art. As well as producing books and paintings, I devote my time to assisting other writers and artist in any way my limited abilities and time allow. If I can assist you, please get in touch through my website http://www.philipcatshill.com.

I would be grateful if you would consider leaving a review for any of my books. I regularly Tweet about reviews, so if you are on Twitter, contact me through my website at http://www.philipcatshill.com with your @name and I will mention you.

The Mad Days of March 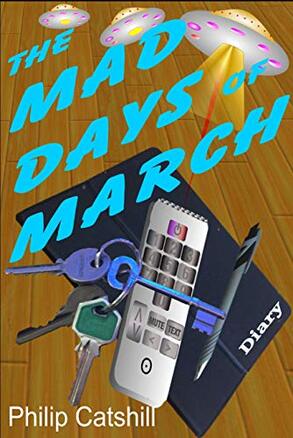 This is the daily diary of Terry March whose single act of kindness leads to a month of madness and mayhem. After helping an old guy dispose of a blood-stained carpet at the local tip, Terry rescues his old TV remote and while driving home, he uses it to zap phantom aliens! This leads him to an encounter with Police Sergeant Susan.

His new resolution to be helpful leads to his first opportunity to be unfaithful to his wife of nineteen torturous years. A soon-to-be divorced Lauren offers her favours to thank Terry for his kindness, but Terry declines the invitation. Within days, another opportunity arises, and Terry can’t convince himself that those phantom aliens haven’t spirited him away to a parallel universe.

Before that first week is over, Terry faces redundancy from his mundane job at the local council. In order to tackle the backlog of paperwork, the council employs a temporary typist, Ashley, who closely resembles Terry’s 19-year-old daughter, Megan. Terry’s wife, Brenda disappears and Carol, her twin sister moves in. When a body is found in his garden, Terry is arrested for murder and Carol adds to his torment by accusing him of rape!

While in a police cell, Terry encounters further problems as Lauren’s police sergeant husband is the custody officer! But all is not lost! Police Sergeant Susan persuades Carol to withdraw the charge and mysteriously, that old guy from the tip makes a deathbed confession to the murder! But the mad days of March are not yet over. Ashley disappears. Terry’s daughter Megan suffers traumatic memories from her past. Lauren’s house is set ablaze, and a mysterious detective Dave is concerned that Megan too has disappeared! All this in a month of the Mad Days of March!

Who Else is There? 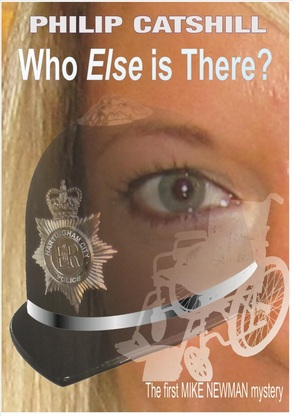 Ask yourself, if you can’t trust the police, who else is there?

First in the Mike Newman mysteries.

While Mike Newman struggles to recover from injuries, corruption spreads through his former police station like an evil cloud. Law is enforced only if these police officers choose to implement it. Crime thrives and permeates their ranks like a disease. Police officers profit by letting criminals walk free. Even murder and rape is not only condoned by them but is even committed by them. In these gripping stories, Mike and his friends are plunged into adventure and danger as they tackle the evil head on.

AUTHOR'S NOTE & WARNING: There are issues in this book that some readers will find disturbing. The author does not give the reader a graphic "as it happens" account of the extreme physical violence used against both men and women, but such details are revealed (as they would be in life) during the course of medical examinations and subsequent police investigations. This is a serious crime novel which addresses the after effects of the crimes, the recollections and attitudes of witnesses, police and suspects, which in many cases, readers may find more distressing than the crimes themselves. The Mike Newman Mysteries are set around the fictitious city of Hartingham and are strictly for adult reading only. 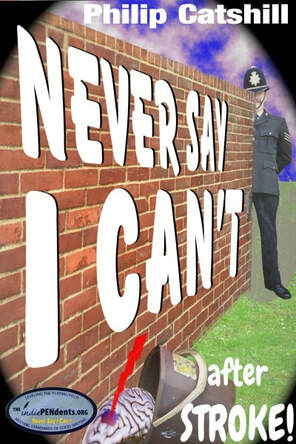 Never Say I Can't is the gripping, humorous, and occasionally devastating first person account of a serving police officer, who at 30 years of age, suffered a major stroke. In his own words, Philip Catshill recounts his battle against the odds to survive, to recover, and to succeed.

"I don't know what the ambulance man did with my bucket. Where did the medical staff put their faces? Mine was in the bucket. It made sense to me. The doctors called it CVA. A few called it a stroke. I laughed. I thought it was a joke!" This book was originally published under the title C.V.A – A Hard Way Back.

Author opens the book with an engaging scene, and we are soon – thanks to the author’s stellar talent in sharing his observations from inside the affected mind – immersed in the disorientation and fear of the post-stroke mindset. ‘Each every’ and the author’s early attempts at speaking are well-shared, and we get plenty of sensory detail such as the feel and temperature of the floor, the vinegar-cleaned windows, and other fascinating details he is able to process. We’re moved by how the author moved through the earliest stages of his recovery when progress has not yet been made. We sense the confusion, the wish to communicate better, the numbness.

Well done.
Author has created a very sensory account here. Very essential to the book’s success. I found the ‘rankings’ of patients in the care center according to whether or not they’ve had a ‘proper stroke’ fascinating. It was amazing to think that the human race’s need to rank and impose status would ever apply to recovering from stroke. It was a deep and moving scene when his friends preferred that he not accompany them to the ground floor for their departure, since it felt like they were abandoning him. That’s heart-wrenching, and the author presented this raw interaction with the concerned friends movingly. ‘I will manage’ uses terrific economy of words to show his empowerment and admirable courage. Settings are rich and detailed, and dialogue with caregivers is richly nuanced. We can feel that the caregivers are sticking to scripts that work with patients, but because they care so much for this patient, they show more heart and honesty with him. Well done.

We cheer for his progress, and we listen intently to his stellar writing voice. Engaging and inspiring.
​

For All Eternity (and other short stories) ~ Mike Newman Series (1) 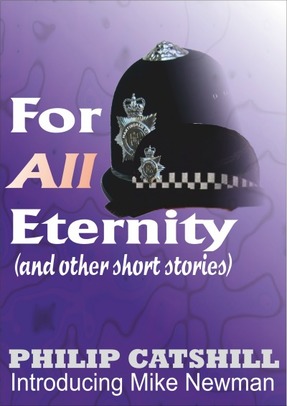 This eBook is available as a free download from some Amazon outlets.

This e-book is made up of a few short stories designed to introduce you to characters who appear in the subsequent Mike Newman Mysteries.

First among them is police officer and rugby player, John Collett. Save for Mike, whom he has known since childhood, John is friendless, secretive and reluctant to share his problems. His police career is marred by his involvement with the deceased in an unsolved murder, where he remains the principal suspect. Despite his passion of open spaces, within weeks of knowing her, John marries the agoraphobic, shy and stammering Susan. In order to illicit Mike's help, John finds he needs to share one of his guarded secrets.

Meet Sandra Taylor. Without having had a single date in her teenage years, the newly recruited policewoman Sandra falls head over heels in love with her appointed mentor, the gentle talking policeman Mike Newman, but Mike is already trapped in a loveless marriage. Sandra soon learns that Mike has steadfast, even old-fashioned morality. He cares about people and doesn’t walk away from anyone, let alone his adulterous wife. On their last day of working together, Mike introduces her to two women at opposite ends of the social scale, yet they have something in common. Both believe corrupt police officers have let them down. One is the grotesque but colourful Josie Turner, the mother of the unsolved murder victim.

When Mike discovers that police themselves are turning to serious crime, he tries for promotion to fight the corruption, but promotion means transfer. In the short time she has left, the inexperienced Sandra must prove her determination to love him, or lose him for all eternity, and not a single day less, but Mike's adulterous wife has other ideas.

Sandra and Mike's relationship is explored further in: Who Else is There? This edition contains an extra chapter, and the first two chapters of the next in the series, Who Else is There? I hope you enjoy this introduction and are sufficiently tempted to follow the series.

This book is for adult reading only.

Sample For All Eternity (and other short stories)