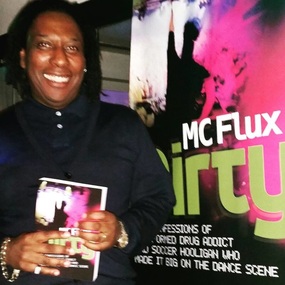 MC Flux was one of the pioneering MCs in the growth of the drum & bass scene, working with many of the leading lights in the UK scene.

Now he's released a book, detailing -- in a street-level manner -- the ins and outs of his lively life, not just in music but with other aspects he's been involved with growing up and surviving in London in the past 30 years.

In the book, he details his early life as a football fan, running with a reggae sound system, being repeatedly stopped and searched by the police, and his early clubbing days. He soon gets caught up in football violence and skirmishing with racists from the National Front, going to acid house raves at Clink Street and getting loved-up at Sunrise in the late 1980s.

As well as being involved in the early days of the UK rave scene, in the early '90s he started being an MC by grabbing the mic one night when Jumping Jack Frost was DJing. He went on to tour with abstract techno don Colin Dale, with the Moving Shadow drum & bass crew, and all manner of d&b names DJs such as Frost, Fabio & Grooverider and so on.

"He's a great MC, one of the most pioneering to grace the mic," says Groove in the book.

During his MCing heyday in the '90s, Flux also set up the Inta Natty clothing brand, but as the '90s drew to a close he got addicted to heroin and started to lead a double life. He was drawn into football violence with the Crystal Palace firm and ended up spending time in prison.

Now a reformed character acting as a social worker to troubled local youth, Flux has detailed his lively life in a new book -- Dirty.

He's also got various headz from the drum & bass scene to talk about their memories of him, characters who weren't aware of the double life he had at the time.

Co-authored with his old pal Pete Nice the book is a right rollicking read.

Flux pulls no punches in telling it like it was. It's the sort of book that should be picked up for a film, or a gritty BBC drama.