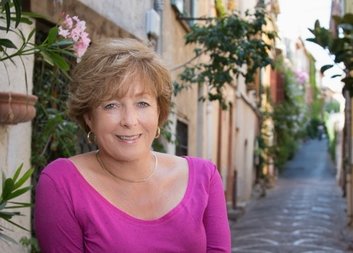 Patricia Sands lives in Toronto, Canada, when she isn’t somewhere else. An admitted travel fanatic, she can pack a bag in a flash and be ready to go anywhere … particularly the south of France, for her annual visit.

As of January 2015, along with being a proud indie author, Patricia is also delighted to be under contract with Lake Union Publishing for her Love In Provence series. This is the women’s fiction arm of Amazon Publishing.

With a focus on travel, women’s issues and ageing, her stories celebrate the feminine spirit and the power of friendship. Encouraging women of all ages to stare down the fear factor and embrace change, Patricia has heard from readers (men too!) ages 20 to 83.

Her award-winning debut novel The Bridge Club was published in 2010 and the audiobook, read by Patricia, will be available soon.

Her second novel, The Promise of Provence received a 2014 National Indie Excellence Finalist Award in Literary Fiction. An Amazon Hot New Release in April 2013, The Promise of Provence was also a USA Best Book 2013 Finalist ~ Women’s Fiction. On Patricia’s stay in France in September 2013, Heidi’s English Bookshop in Antibes hosted a book signing attended by readers from six countries. Although Heidi’s has closed, the Antibes Book Shop on Rue Georges Clemenceau continues the tradition and Patricia’s novels can be found there.

Due to tremendous reader response, The Promise of Provence became Book #1 in the Love In Provence series. Promises To Keep ~ Book #2 was released in Summer 2014. I Promise You This ~ Book #3 was released on May 17, 2016. The series explores a mid-life coming of age and allows readers to lose themselves in the beauty of the south of France without leaving home. Patricia was invited to join the Lake Union imprint (Women's Fiction) of Amazon Publishing in January 2015.

Patricia has led two 10-day tours of the French Riviera and the countryside of Provence. These trips were based on The Promise of Provence, with the Women’s Travel Network. Let her know if you would like to go with her and a small group of women. It’s the perfect trip for women traveling on their own or with good friends. She is already counting the days to the next tour which is scheduled for June 6 to 18, 2017.

Find out more at Patricia’s Facebook Author Page, Amazon Author Page, Goodreads, or her blog where you will find links to her books, social media, and monthly newsletter. She loves hearing from readers, so don’t hesitate to email her.

Her newsletter, sent once a month, contains special giveaways as well as her photography and information about the south of France, her home away from home.

The Promise of Provence ~ Love in Provence - Book One

I Promise You This ~ Love in Provence - Book Three