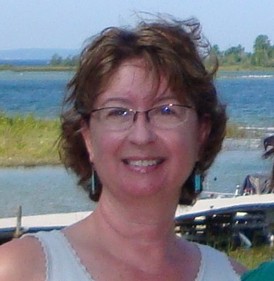 When it comes to careers, I think you can call me "ambidextrous." I've gone from journalism to criminal prosecution...and now I'm very happy doing both!

If you'd told me fifteen years ago that I'd be spending three months in a body cast after a riding accident, then ditch freelance writing in favor of going to law school, argue before the state supreme court five times, start wearing spike heels and then start my own website...I'd have called the cops and suggested a nice stay in a padded room for you.

But it all happened, and after that dramatic career change from journalism to law, a few years later I found I needed desperately to get back to the keyboard. I love my job as a prosecutor, but to be honest, legal briefs do torture and violence to the English language. And there are times that if streams of more creative words don't escape from my fingertips, the top of my head may just leave my body.

So I started writing essays on my own website, "Running with Stilettos," three years ago. Some won awards, some got reprinted elsewhere, and eventually some made it into my first book of the same name that I published in 2008. Some will make you laugh, some will make you cry, some will probably get you to say "hey, I've been there, done that!!" Dating, power tools, shoe shopping, chocolate addiction, friendship, tragedies, celebrations and the melancholy that comes with kids growing up and growing away, they're all in there. And don't forget the view from the back of a Harley, or going on "spring break" for the first time at the age of...ahem...nevermind!

Since that first book, I've published two more--"Heck on Heels" (2009) and "Fabulous in Flats" (2011). "Heck" brought home an Indie Excellence Award for Inspiration, and "Fabulous" was named 2011's Published Book of the Year by the Florida Writers Association. Both of these were named "Book of the Year" finalists by ForeWord reviews.

Running with Stilettos: Living a Balanced Life in Dangerous Shoes 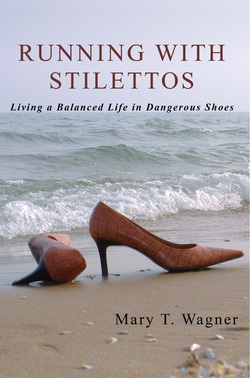 After switching careers in mid-stream from journalism to criminal prosecution, Mary Wagner returns to the keyboard with an outstanding collection of essays from the heart. By turns funny, touching, courageous and enterprising, Running with Stilettos is a wide-open window into one woman's mission to give every day her best shot...in fabulous shoes.

Wagner's writing has been described variously as "barbed wire prose," "bed-time tales for grownups," and "the Midwest's answer to Carrie Bradshaw." This essay collection, first published in 2008, has received a Silver IPPY Award, a Mom's Choice Gold Award, and took a first place in the National Federation of Press Women's communications contest. 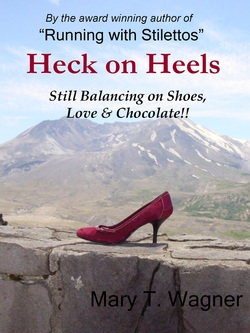 This Indie Excellence Award-winning collection of essays by Mary T. Wagner continues in the tradition of "Running with Stilettos," describing ordinary moments with extraordinary skill. From hiking up the side of a dormant volcano to getting back in the saddle after a serious riding accident, Wagner invites the reader to join her in living life full-throttle. This books, published originally in 2009, also contains two dozen of Wagner's stunning nature photographs in black and white. Whether keeping vigil at her father's deathbed or stifling the urge to buy another pet rabbit at the county fair, these moments of unmistakably real life are etched indelibly with humor and compassion and love. This book includes the essays "Love in the Time of Cupcakes" and "May it Please the Court," both of which were finalists in the Royal Palm Literary Awards competition. "Love..." charts the growth of a family's adventures as measured in theme cupcakes, while "May it Please..." delves into the author's decision to go to tip her life upside down and go to law school at the age of forty.New and improved Kindle version brings the number of photos to nearly forty, in glorious color. 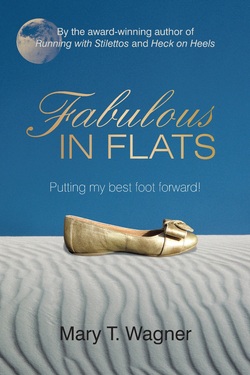 After publishing her first two nationaly acclaimed essay collections in spike heels, journalist and prosecutor Mary T. Wagner finallya admits that high heels just aren't the footwear for every occasion...especially when power tools are involved! While learning how to use a cordless drill and a chain saw were two huge mile markers along in Wagner's learning curve as an "unmarried woman," they were nothing compared to learning how to cut bricks with a chop saw balanced on the end of a pickup truck. Wagner, who has been described as "the reincarnation of Erma Bombeck...in sexier shoes," once again joyfully celebrates such moments as dancing the Viennese Waltz in strapless pink chiffon and opera length gloves, surviving an auto accident in the midst of a blizzard with the help of some kind strangers, and realizing that living well really IS the best revenge.