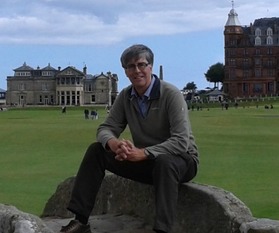 I am a 59 year old Accountant who semi-retired to explore my love of creative writing. In my career I held Board level jobs for over twenty five years, in private, public and third sector organisations. I was born in Coventry, a city then dominated by the car industry and high volume manufacturing. Jaguar, Triumph, Talbot, Rolls Royce, Courtaulds, Massey Ferguson were the major employers, to name but a few.

When I was nine year’s old I told my long suffering mother that as I liked English composition and drama I was going to be a Playwright. She told me that I should work hard at school and get a proper job. She was right of course.

I started as an Office Junior at Jaguar in 1973 at eleven pounds sixty four a week. I thus grew up in the strike torn, class divided seventies. Notably in the 1974 miners strike we were hit by the three day week and worked with lighting from a generator. The Jaguar factory which employed thousands of people in Coventry is now a building site, and the office in the Triumph factory to which I later transferred is now a MacDonald’s.

I have lived in the midlands, the south of England, and now in rural East Yorkshire with Sandra, my wife of thirty six years. I suppose that as such I have a reasonable perspective on our current difficulties as a nation. I take the view that our current austerity is a consequence of our collective failings in the past rather than a policy, and that the lessons of our history shouldn't be lost.

We should have less class division in our country, which although less of a factor today still exists in too many areas of life. I think it is fair to say that my own journey from Office Junior to Boardroom could not have happened in my father’s generation, so with every generation we seem to make progress.

But in the seventies I also saw at first hand the damage done by politically driven Trade Unions and ineffectual class ridden management. This division wiped out much of UK manufacturing which is in my view the root cause of the austerity we know today. I thought it important to capture this in a fiction novel, and Pen Pals is the result.

The opportunity to rekindle my interest in writing came in 2009, when I wrote my first pantomime Cinderella, for my home group, the Walkington Pantomime Players. I have now written seven, with the eighth, Beauty & the Beast, now in the works. I love theatre, particularly musical theatre, and completed the Hull Truck Theatre Playwrite course in 2010. My first play, a comedy called He's Behind You, had its first highly successful showing in January 2016, so I intend to move forward in all three creative areas.

Pen Pals is my first novel, but a second, The Road to Cromer Pier, will be released by Christmas of 2016.  I’m an old fashioned writer I guess. I want you to laugh and to cry. I want you to feel that my stories have a beginning, a middle, and a satisfactory ending.