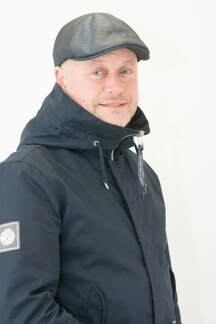 Mark Pettinger is a crime fiction writer of the DCI Priest novels. His debut The Decalogue entered the Amazon Bestseller Top 100 list in December 2015, and the Top 10 on the sub-genre of ‘police procedurals’.

Mark was born in a maternity ward attached to RAF Manston in Kent. His father was in the Royal Air Force, and for the first few years of his life, he lived on a number of RAF bases on the east coast of the UK with his parents and sister. Skip forward a few years; now married and with children he lives in a small village in East Yorkshire.

Fitting his writing around his 'day job'; Mark's writing pattern is somewhat sporadic, and he writes when he can, which currently is in hotel rooms / foyer, or in an airport lounge trying to keep one eye on the departure board to ensure he doesn’t miss his flight!

Mark's interest in the murky world of crime started a number of years ago when he was attracted to reading true crime. He became fascinated with the exploits of the Yorkshire Ripper, Dennis Nilsen, John Wayne Gacy, Andrei Chikatilo etc. An avid reader of many genre's, but his attention turned to favouring crime fiction; and his reading list includes Ian Rankin, Mark Billingham, Lynda La Plante, Jo Nesbo, and latterly CJ Tudor (for something just that little bit special).

Mark has openly credited Ian Rankin as the primary inspiration for not only stirring his interest in reading crime fiction, but also 'picking up the pen'.

Mark has published two hugely successful crime fiction novels: The Decalogue in 2012, and Tick Tock, Time's Up in 2015. Long overdue, critics have noted, Mark published the third instalment in the DCI Priest series Paper Soldiers in March 2020.
​
Next on his list is a standalone crime thriller, due for publication in summer 2021.