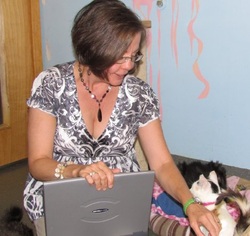 Lizz Lund loves Lancaster. Since 1999, she's been having a terrific time here and thinks everyone else should, too. She is a newlywed and head-over-heels about her chef husband; she made him move from New Jersey, too. Kitchen Addiction! is her first novel of the Mina Kitchen series. Lizz grew up in Glen Rock, New Jersey and still hasn't recovered. She holds a BA in Musical Theatre from Syracuse University, but has never learned to waitress. 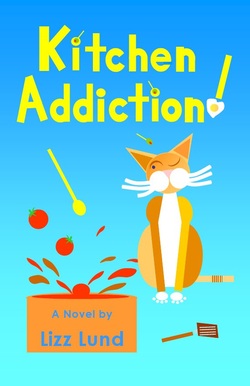 Meet Mina Kitchen, a forty-something single who likes to cook - and cook and cook. In fact, her zest for whipping up trays of canapes is dwarfed only by her weird luck and mountain-lion size tabby cat, Vinnie. That, and her godmom's tendency for blackmailing new members into joining St. Bart's. Okay, maybe Mina's Swiffer-addicted neighbor, Vito, is a bit weird, too. As if all that wasn't enough, Mina's a Jersey girl transplanted in the midst of the Amish-flavored countryside of Lancaster, PA.

Things get really complicated when she learns that her neighbor Vito is in a witness protection program, and her dry cleaner deals in prescription samples. Throw in a few mysterious flaming feces flingers and a fuse box labeled in Arabic, and you have a recipe for catering disorders.

Kitchen Addiction! will keep you smiling when you're not LOL-ing. Set in Lancaster, Pennsylvania, you'll find a surprising cast of characters, humorous plot twists, red herrings and actual recipes. Well, some of the recipes are real. The others you might to take with a pinch of salt, and some Tums.

If you're looking for a funny fiction read, packed with humor, excitement - and recipes - look no further. Lund's debut "chick lit" novel blends fun characters, great dialogue and zany capers into a frothy fiction that's sure to amuse. The novel also delivers a virtual tourist romp through the actual streets of Lancaster City and its surroundings. 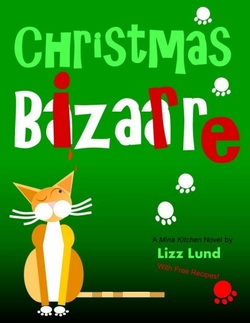 What do Santa’s Sidekick, a dead lawyer and a geriatric vampire have in common? Meet Mina Kitchen – a forty-something single who finds trouble quicker than she can whip up a batch of breakfast breads. Plural. Her catering disorder runs neck-and-neck with her weird luck, and her cat’s weirder tendency toward gnawing elf gear. Okay, and getting kidnapped a couple of times in one week is a little strange, too.

Her next door neighbor Vito's past as ex-leader of the Moils, the Jewish-Polish Family from Bumville, New Jersey, comes to light and throws a dollop of dilemmas into an already simmering plot.

Top it all off with a counterfeiting ring, a county-wide dearth of holiday wrapping tape, and a mass of pets running loose at the local mall, and what do you have? A recipe for disaster that Mina whips to a froth.

Christmas Bizarre will keep you smiling when you’re not shouting up a belly laugh. Set in Lancaster, “Pee-Ay” you’ll discover a lively cast of characters, funny dialogue and lots of twists and turns. Hang on tight – you’re in for a slalom of a holiday ride.