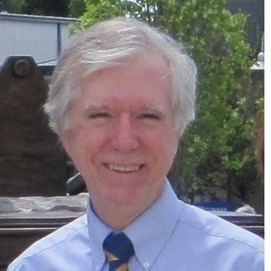 After college, he moved to the East Coast where he filled his life with many careers including teacher, professional musician, computer programmer, and researcher. He wrote his first novel in 1980, and penned two more "bookend efforts" before his breakthrough novel, "Four Years from Home," was published in 2010. That book went on to be a top 100 U.S. Kindle best seller and a category best seller for nine months. He has since written "A King in a Court of Fools," a serial novel read by thousands online weekly for over a year until published in book form, "Buffalo Nickel Christmas," a Christmas fantasy set in the 1950s, "12|21|12," a short piece of alternative science fiction, "A Cape May Diamond," a story of mystery and redemption, "The Adventures of Walter Stickle," a 3-book series of science fiction about an ordinary man with extraordinary adventures, "The Blacker Death," a thriller that pits one man against the mob and a deadly disease, and "Transcriber," a story of timeless love and unnatural hate.

Larry lives on a small farm with his family and a lifetime of ideas. 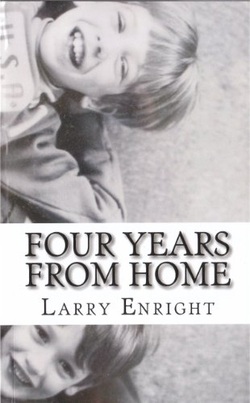 Tom Ryan — firstborn of five children in a large, Irish Catholic family, smart and acerbic, a cheat and a bully — calls himself the future king of the Ryans. There are other opinions. His mother calls him a holy terror. Mrs. Ioli calls the police on him. His father says that had Trouble been a saint, that would have been Tom's middle name. But his parents, neighbors, peers, and siblings all must bow down before him or suffer the consequences. Just ask the Christmas turkey leftovers he buried in the side yard.

Harry, the youngest Ryan, was the shining star of the family. Bright, sensitive, and caring, he was protected by parental radar, called by God and Grandma Ryan to the priesthood, and was in Tom's eyes, a brown‐nosing little punk who had become a threat to his kingdom and the primary target of his search and destroy missions.

Then Harry changed. He abandoned his vocation and quit the church, and when he left for college, he left for good. He never called. He rarely wrote. His picture disappeared from the mantle. It was as if he had ceased to exist and his shining star had been but a passing comet. The enemy had retreated and Tom's war was over.

Written by the son of Irish Catholic immigrants, "Four Years from Home" redefines brotherly love in the darkly humorous and often poignant actions of its principal skeptic, Tom Ryan.

Available in NOOK ebook at Barnes&Noble.com

Download a sample chapter of Four Years From Home (pdf) 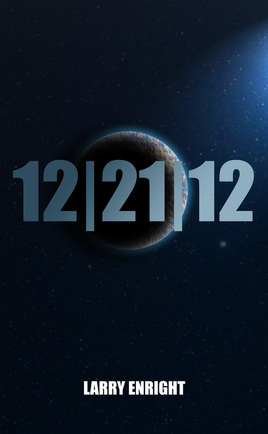 The world ends for someone every day. One day it will end for everyone.

A King in a Court of Fools 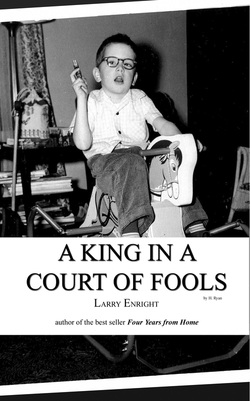 A King in a Court of Fools begins with a book -- The Book of Tom -- a journal writing assignment from Tom Ryan's sixth-grade teacher, Sister Jeanne Lorette. That's what she called it. Tom called it punishment. In it, he chronicles the adventures of the Caswell Gang, a group of siblings and friends with two things in common -- their love of adventure and their allegiance to Tom, their king.

The 1950s book was misplaced a long time ago, and all the children have since grown up, but Harry, Tom's youngest brother, still remembers it and retells for us one of its stories in a nostalgic, heartwarming, and humorous way that will have you wishing for adventure, too. 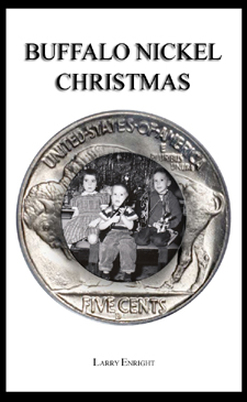 It’s Christmas Eve in sleepy little Gambier, Ohio, and a massive snowstorm is giving the rural town more than just a white Christmas. Roads are closed, everything is shut down, and the monster outside is angry, rattling the windows and howling in the chimney.

Harry Ryan, a sophomore at the college there, decided to stay at school over winter break to finish his term paper, but it’s not going well, and now he regrets the decision that left him stranded so far from his family on such an important occasion. You see, as well as being Christmas, December 25th is also Harry’s birthday.

As he looks out his window at the stark and beautiful campus, at the icicles on the bushes along Middle Path, and the snow pasted on the windward sides of trees, and the layers of vanilla icing covering the world’s chocolate cake, it reminds him of a Christmas a long time ago.

Buffalo Nickel Christmas is the story of that special day. It begins with an ordinary boy in an ordinary world, but as a monster storm approaches, and Christmas Eve finally arrives, the boy discovers that he is anything but ordinary, and that the world is a very magical place indeed.

You will meet some unusual people in this story, and hear unbelievable things. You might even see a wizard and a king or two. Sixteen forevers will pass in this book. That’s a very long time, and many magical things can happen when it’s sixteen forevers and still no Christmas. Whatever you do, don’t listen to that little voice inside your head that tells you it’s illogical, that it doesn’t make sense. Listen for the whistling teakettle and be ready with your wish.

A Cape May Diamond 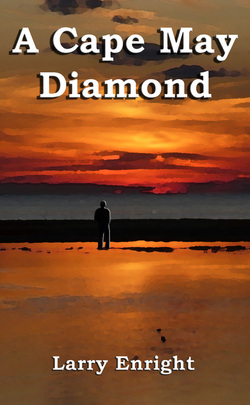 It was Monday, May 19th, 1975. I’ll never forget that day. The Vietnam War had ended with the fall of Saigon that April, and the world was mired in one of its worst recessions ever. Unemployment in the United States was nearly nine percent, inflation even higher, and leadership lacking. The Watergate scandal had cast a smear across American politics, resulting in Richard Nixon’s resignation in August 1974 to avoid impeachment, and his successor’s immediately pardoning him to close the book on an unhappy chapter in U.S. history.

It was not a good time for anyone and a particularly hard time for the old Victorian town of Cape May. The crown jewel of the New Jersey shore had fallen into neglect and disrepair and was dying a slow death. Once the elegant summer home to presidents and kings, it had become the last refuge of the deposed.

That’s where I met Tom Ryan. Tom was a king, or so he would have you believe, but unlike Richard Nixon, when Tom was dethroned, he wasn’t sent home with a slap on the wrist. He was sent to prison. He was a convicted draft dodger, but one of the lucky ones released early by President Ford as part of his mass clemency after Nixon’s pardon. The problem was, Tom had nowhere to go when he got out, so he took the money his dad mailed to him and spent it on a bus ticket to get as far away as possible to a place where nobody cared who he was or what he had done, a place where nobody cared about anything. That place was Cape May.

As hard a time as it was for everyone, it was harder for me because that was the day I met Tom Ryan. I should have turned and walked away. I knew it when he first looked at me, but I didn’t, not my first mistake, but one that would make Monday, May 19th, 1975 the hardest day of my life.

This is the story of how Tom Ryan and I met and how things never quite work out the way you think. You might find a love story in here somewhere. You might not. You might find a message hidden in one of the nickel pop bottles collected by the beachcombers from some of the most beautiful white sand beaches in the world. You might even find a little mystery, but life is a mystery, isn’t it? 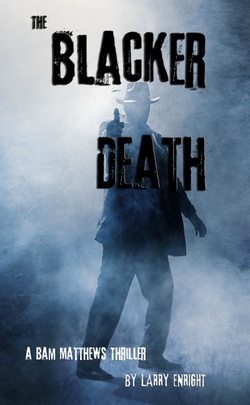 Nominated for 2015 thriller of the year by the prestigious Kindle Book Review and finalist for best thriller of 2015 in the IAN Book Awards.

“Only three things in life are guaranteed: you’re born, you die, and somewhere in between, if you keep playing the odds, you’ll get lucky. What makes me such an expert? Nothing really. My name is Bam Matthews, I’m an FBI agent, and in forty-eight hours, give or take, I’ll either be damn lucky or stone-cold dead. Guaranteed.”

And so it goes for Bam Matthews, an FBI agent at the end of his career, who in his own words “should have retired years ago, but other than my job all I've got is a dog who can beat me at checkers, an old farmhouse in Jersey with a sixteen penny nail I drove into the kitchen wall to hang my piece at night, and this Gremlin that I've kept running for thirty-six years.”

The story opens when a New York hit man comes to town and whacks a local drug dealer right under the FBI’s nose. A complicated case to crack, but nothing compared to what Bam and his partner find lying on the sidewalk bleeding to death after leaving the murder scene: the first-ever case of Ebola to be reported in the city. This gritty first-person thriller follows a breadcrumb trail through murder, panic, fear, and revenge, drawing you inexorably to an unforgettable heart-pounding conclusion. As one reviewer said, “You can’t put this book down.”

​(Note: Some language and situations in this book may not be appropriate for children under 18.)