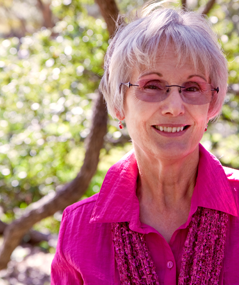 Kathy is a novelist. Also an infrequent poet. Most days, she would rather write than eat.

Like the t-shirt says, she wasn’t born in Texas, but she got here as quickly as she could.  Which wasn’t very quick at all.  As a matter of fact, not counting a brief visit back in 1969, it took her decades.  Hundreds, make that thousands, of turtles got to the Lone Start State before Kathy did.

Picture a small-town California girl chomping at the bit to break out of the sticks and see the world.  That was Kathy.  About the time she graduated from high school, her friendly neighborhood United States Air Force recruiter offered her a ticket to ride.  Sure enough, as soon as she signed on the dotted line, Uncle Sam whisked her off to exotic San Antonio for basic training; lovely Biloxi, MS, for more training (and hurricane Camille); then Washington, D.C. for the rest of her enlistment.  So much for seeing the world.

Four years and one honorable discharge later, she found herself in Pennsylvania Dutch Country, using the GI Bill to earn a bachelor’s degree in German from Millersville University and a master’s in same from Villanova.  While at Villanova, she collected ample evidence to suggest she would never grow up to be a college professor.  Let’s face it, very few universities consider the ability to lull 20 undergrads into catatonia in less than five minutes a hiring point.  Ergo, she graduated with fluency but no marketable skills, although she did leave those hallowed halls with a fascination for language and a borderline obsession for grammar that have since proved useful.

She spent the next decade or so as a stay-at-home mom to two sons (Leo and Nick), combating academic/business-speak, grammatical errors, and pesky typos as a freelance editor/proofreader for everyone from college students to professors to Armstrong World Industries.  (You haven’t lived until you’ve proofread a flooring catalog.)  Before she knew it, her sons were adults and insisted on being treated as such.  Go figure.

Pennsylvania wasn’t the laid-back West Coast she grew up on, but it was tolerable.  Until the day the weather person cheerfully informed her the high would be six degrees with a wind chill of thirty below.  At that point, Kathy started to rethink the whole living-in-the-Northeast scenario.  Nose and fingers dutifully protected against frostbite, she picked herself up off the icy sidewalk (again), wondering if this might not be the perfect time to head for warmer climes.

It was, and warmer climes turned out to be Texas.

One problem.  Her two incredibly talented and creative sons—musicians and artists, the both of them—flatly refuse to leave the frigid north for the sunny, drought-stricken, wide-open spaces.  Even her best friend moved to New York.  Since her favorite people are all up thataway, she’ll probably be emigrating back up yonder before too long.

Meanwhile, she writes futuristic thrillers, works as a communications specialist, takes brisk walks with Molly (her dog), reads, and indulges in her latest hobby at the firing range.

Kathy got her feet wet penning romances for Bantam Loveswept back in 1997.  She published two books with them—one of which, For Love or Money, won a 1997 Romantic Times Reviewer’s Choice Award—then life got complicated (for a very long time), and things changed, including her preferred genre.

She has since self-published two futuristic thrillers.  Amanda’s Eyes is a tale of  murder and mayhem with a dash of “there are more things under heaven, Horatio.”  Why Live?  is two parts futuristic thriller, one part love story.

She is currently working on the sequel to Amdanda’s Eyes, a journey into murder and mind control called Mind Games.

Thanks to her day job as a communications specialist with a major university, Kathy has written more than one hundred features for print and the web. 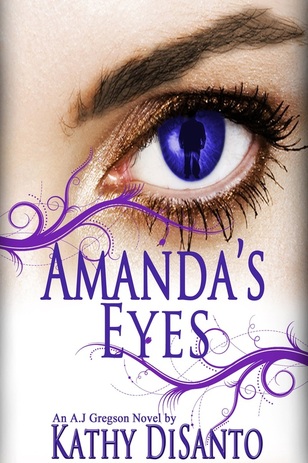 Waking up is the pits when you come to in a hospital with a broken arm, a colorful assortment of abrasions and contusions, and a face swathed in bandages. It’s even worse if you can’t remember what hit you.

The bad and the ugly are crime reporter Amanda “A.J.” Gregson’s business. But learning she had a ringside seat for an explosion that killed two agents of the Continental Intelligence and Investigative Service (CIIS), incinerated an entire block of warehouses, and did so much damage to her eyes they had to be surgically removed? Well, that gives the darker side of life a whole new meaning.

Haunted by elusive nightmares, A.J. waits for her transplant and struggles to remember the events leading up to the fateful night of September 4, 2075. Weeks crawl by without a glimmer, before memory floods back the night before surgery, every brutal detail crystal clear.

The explosion had been the work of the Ferrymen.

"The Ferrymen. My not-so-magnificent obsession for more than a year. Only a cataclysm could have made me forget. I guess you could call them hitmen. You could also call Einstein a math whiz. Think ruthless. Think unstoppable. Think killers so proficient 'caught the ferry' was fast replacing 'bought the farm' in common usage, and you have the Ferrymen in a nutshell."

The transplant surgery goes off without a hitch—welcome news, because A.J. is raring for a rematch with Hell's Boatmen. But contrary to popular belief, what you see isn't always what you get. Take her new eyes, for example. Those baby blues may look perfectly normal, but they possess a power that turns her world upside down—the power to see into the hidden dimensions of the human heart.

When the Sight unmasks the mastermind behind the Ferrymen, the unveiling is as stunning as it is unbelievable. The revelation sets her on course for a second head-collision with evil. Will she survive the final encounter? 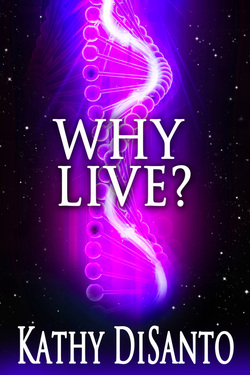 "To be, or not to be, the woman I was engineered to be?" That's the question third-generation clone Kai-Lee Fox can't help asking herself. And it's all Ella Fitzgerald's fault.

For more than four hundred years, all aboard the star cruiser Janus has been sweetness and light. Thanks to advanced techniques and a flawless educational system, life goes on ... and on and on … for the five hundred souls (a.k.a., the Quingenti) who bolted Earth when the Global Assembly refused to legalize human cloning. (It was only meant to be a temporary fix, after all, a stop-gap strategy adopted while science struggles to conquer the Known Span, that one-hundred-twenty-year mortality threshold everybody reaches, but nobody crosses.)

Who knew six lousy words could trigger a rebellion? Especially words as apparently harmless as, "There was only one Ella Fitzgerald." But the words no sooner leave Kai's mouth when the light goes on and the trouble begins. Before long the same truth that rocked her world makes itself known to a handful of others, and at least one of them doesn't have the sense to keep quiet.

When Dr. Ke-Ling Yan, the Colony's lead geneticist and a member of the ruling Council, announces his intention to move for the abolition of cloning, the mild-mannered Quingenti reveal themselves as anything but. Believing Ke-Ling is the only "catastrophically imbalanced" citizen, the Council opts for containment via the Alpha Genesis Option. (Think microchip, implanted in every colonist's brain. Think excruciating, in extremis, involuntary intervention that wipes the mental hard drive, producing a zombie ready and willing to be reprogrammed.)

But word gets out before the mind police can make their move, and Ke-Ling takes containment completely off the table with a shockingly public suicide and a ship-wide broadcast designed to open everyone's eyes. In no time at all, the life aboard the Janus morphs into an interstellar witch hunt. Every secret will be exposed, every non-compliant psyche raped.

Will Kai-Lee and her friends be able to hang onto the new lives they've found? Where do you run when you're on a space ship millions of miles from nowhere, and the hounds are closing in?