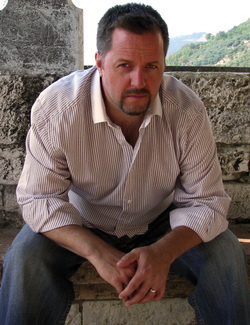 Jonas Saul is the author of the Sarah Roberts and the Drake Bellamy Series. Jonas lives in Europe with his author wife, Kate Cornwell. 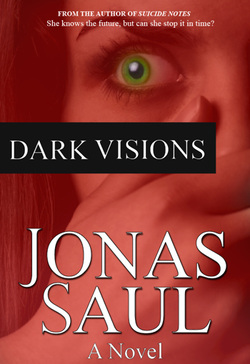 Sarah Roberts has a unique problem. She experiences routine blackouts, but what's different about her temporary unconsciousness is, she wakes to notes written by her own hand. These notes are prophecies. Dark Visions. Future events with dire circumstances. Circumstances that she can avert, because Sarah is an Automatic Writer.

The novel begins with Sarah responding to one of her messages: Sit under the Elizabeth St. Bridge at 10:18am. Bring hammer.

Her next task is to avert a kidnapping. She's done it before. Couldn't be that hard. Things go wrong. The kidnappers recognize her. People are killed. Witnesses place Sarah at the scene. The police find her notebook riddled with prophecies of accidents and crimes. They want answers.

All this happens while the eighteen-year-old star in this first novel of the Sarah Roberts series suffers from trichotillomania, which means she's a puller.

The story has numerous twists and turns and finally ends with a massive climax and a lead in to The Warning, which is Part Two of this series. 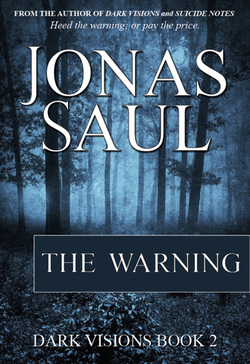 Sarah Roberts has spent the last four years, helping people stay alive, and escape near death experiences, as messages from the dead come to her.

As the story opens, she receives a daunting communication from the Other Side regarding her sister's murderer, and where she can find him. The message isn't clear enough to confirm the man's identity, causing Sarah to wonder about the veracity of the message.

When she receives The Warning, Sarah decides to disregard it. The tables turn, and now Sarah's being hunted, instead of being the hunter.

How many people have to die to catch one murderer? How far will Sarah go?

This book explores the intense violence that she must endure and the absolute horror and reality that has become her life as an Automatic Writer. The Warning begins as a flame, sparks to a fire and explodes with a violent climax in the life of a girl who talks to the dead in order to help the living. 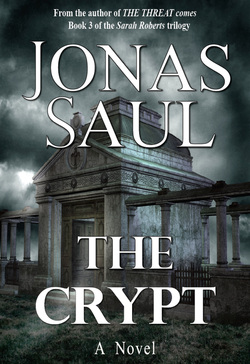 The Crypt, Book 3, opens with Sarah Roberts walking the streets of Budapest in search of a weapon.

A strange man in a fedora has been following her. Before she can find out who he is, she's arrested and brought to a Hungarian jail. After her release, she's ordered out of the country.

Vivian sends her a message, warning her that it all ends in "The Crypt" in nine days. An apology accompanies the message.

While Sarah remains in Hungary and struggles to locate Armond Stuart she has to keep the Hungarian Government off her back as well as the fedora-wearing American who has a ten-man team hunting her.

The only way to escape their reach is to fake her own death. Sarah Roberts concocts a plan that will deal with Armond Stuart and have herself killed in the process.

What begins as a fight for vigilante justice ends with dark consequences. 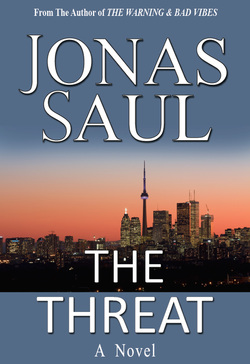 His mother is dying of cancer and his father has sent him out to purchase medical weed from an unknown dealer. Things go bad fast. During the deal on the fourteenth floor of an apartment building, the dealer disappears, and Drake is stuck in the apartment with a dead woman.

The police are at the door. He has nowhere to go.

Now on the run from the police and the maniacal killers who seem intent on framing Drake for murders he didn't commit, he must find out what's happening before it is too late.

He discovers there is a reason behind the madness that has become his life. That information takes him back twelve years to when he was hospitalized with a concussion and his fiancé went missing.

Drake Bellamy didn't want to break the law, but now he's out for blood in order to survive. 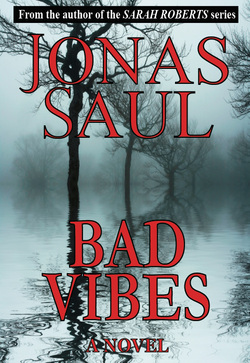 Bryce Jacob is a tormented man. His son was murdered and the search for justice has cost Bryce almost a year of his life.

As he's closing in on the organization who may be responsible for the murder, he's hit with something the media call an 'air-quake'.

After a week in a coma, Bryce wakes with a new vision: he can see the Other Side.

An anonymous call warns Bryce that an attempt on his life is imminent.

A strange woman shows up by his hospital bed with a warning and a message. 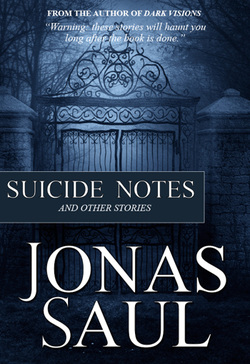 Suicide Notes is a collection of stories that take the reader to a dark place, where only horror resides.

In the first story, Suicide Notes, a young girl living in Hover's Grove has lost her mother to suicide, but she won't accept it. A note shows up years after the fact claiming her father was involved. She starts asking questions. The local sheriff acts weird, her father's answers are evasive. She's approached by an old woman who warns her to be careful. Taking it upon herself to continue her sleuthing, she ends up at the mercy of the murderers. People she trusted. People she thought would protect her.

Laying in her coffin, waiting for the witching hour as an earth sacrifice, Vanessa has no idea that her story has one more surprise left.

In the second story, Don't Shoot, Jim has decided he wants to join the others who live in his basement apartment. He's a bachelor, living alone, in a haunted flat. The visitors knock on the walls, move things around, and torment him to no end. He begins digging through the wall and into the dirt foundation of the house, searching for the perpetrators. If they can be disruptive, then so can he. But first, he must remove his pesky landlord who harasses him about the noise. He must also come to terms with the horror that his life has become. From childhood when his mother was murdered, until she visits him in his apartment, Jim commits to insanity, and takes along with him a diverse understanding of reality.

In the third story, Hatred, Walter is a real estate mogul. He buys old property and demolishes whatever's there to make way for future development. In each building he razes, he removes a souvenir so the life of the house will always live on. The problem with the current project: the house was owned by a murderer who has never been found. When he removes an antique couch, he could not know that anyone who goes near the couch grows an intense hatred for the people around them. If they sit on the couch, the need to kill is so brutal that it becomes a blinding rage. One that envelopes everything about the person and can only be satisfied by absolute destruction of their loved ones. When Walter attempts to rip open the cushions of the couch to discover the source of this hatred, a hell breaks through that only extreme horror could be comfortable with.

These and many other stories await you in Suicide Notes.