Before becoming a history teacher in 2000, he worked in a variety of blue collar jobs as a labourer, scaffolder, rigger, dogman, railway fettler, and painter and docker.

​In 2006 he set up the website Togs's Place.Com. The name Togs comes from the Cobb and Co way station,Togs’s Place, his Italian grandfather/nonno Antonio Tognolini and grandmother Annie, native born of an English convict and Irish migrant who both arrived in Hobart in the 1830’s. His grandparents used to work and live there with their 13 children, from the Victorian Gold Rush to it becoming the family farm in Yandoit in Central Victoria.

He has a First Class Honours Degree in Communications from the University of Technology, Sydney and a Diploma of Secondary Education from the University of Western Sydney. He’s also been a marker for the NSW Higher School Certificate’s Ancient History Examination. He also completed the TAFE Certificate Two in Fire Fighting Operations and was a volunteer bush fire fighter for seventeen years.

Originally from Melbourne’s Brunswick, he lived in Sydney and the Central Coast before moving to the Blue Mountain’s town of Katoomba in 1992 and was there for sixteen years before moving to Wellington in Central West, New South Wales in 2008.

The Mountain City Murders, his first novel was published by Adelaide’s Ginninderra Press in 2010. His autobiographical account of heart disease Singing Johnny Cash in Cardiac Ward, A Personal Story of Heart Disease and Music was published in 2013. His first historical novel Brothers Part One: Gallipoli 1915 was published in 2014. These three books have been translated into Chinese. All his books are available through WritersandEbooks as both paperbacks and ebooks.
​
He is currently completing his historical novel series Brothers with the following three parts concentrating on the Western Front in France and Belgium from 1916 to 1918. He is also working on two more parts of his historical series, A History Man’s Past & Other Peoples’ Stories: A Shared Memoir. Part 2: What Is My Nation? History, Racism, Class, Justice & War and Part Three: Working People and Music.
​
In late April 2016, he moved back to Katoomba and is on the New South Wales Teachers Federation’s State Council for the Blue Mountains and is secretary of the Blue Mountains Teachers Association.
There’s an additional part of my story, explaining the fantastic healing power of music. This isn’t just a recounting of my journey of the heart, but also the story of my relationship with music. That relationship goes back more than twenty five years, alongside my involvement in radio. I’ve been fortunate enough to meet some great musicians over the years and a few have played a big role in my life.

This isn’t just a descriptive account of my experience with heart disease, it’s also a serious attempt to help reduce the large death toll caused by it.

John Tognolini
﻿
About the photo on the front cover

Russell Crowe, Amanda Dole and myself outside Radio Redfern on May Day 1989. Russell had just performed a few songs on my show, Radio Solidarity. In 1988, Radio Skid Row was evicted from our studios in the basement floor of Sydney University’s Wenthworth Building. We were taken in for eighteen months by the Aborigines/Kooris at Radio Redfern, who now broadcast across Sydney through Koori Radio, until we built and opened the Radio Skid Row studios in Marrickville in 1990. Photo by Frances Kelly.

In Hardy’s classic Melbourne’s Collingwood is Caringbush and in Mountain City Murders, Mountain City is the Blue Mountains town of Katoomba and The Three Sisters are Tiddas Rocks. (Tiddas is a common Aboriginal for sister/s. It also the name of the great Australian Aboriginal women’s band that performed for ten years from 1990-2000, comprised of Lou Bennet Yorta Yorta, Amy Saunders Gunditjmarra and Sally Datsey native born).

I will be writing three future volumes to Brothers dealing with the Western Front in the years 1916, 1917 and 1918.

About the Front Cover

This photograph is of Sergeant Stephen Tognolini, (back) Military Medal and Bar and Corporal Sergeant Major George Campbell Hunt, (front) Distinguished Conduct Medal, and was taken on June 27th, 1918 in Querrieu, France. It is part of a group photograph of the 21st Battalion’s Non-Commissioned Officers. Both served at Gallipoli. George Campbell Hunt was killed in the Battle of Hamel on July 4th, 1918. 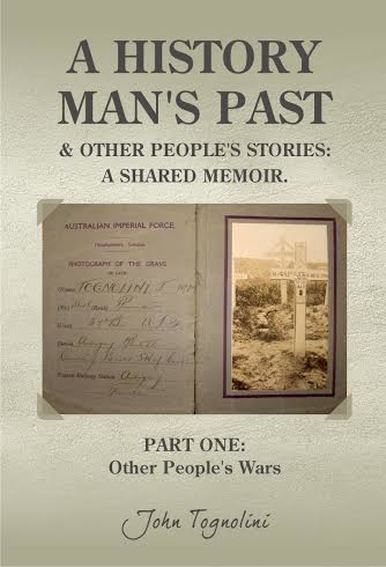 A History Man's Past book review

A History Man’s Past & Other People’s Stories: A Shared Memoir. Part One: Other People’s Wars is a shared history in many ways. It’s where part of my story reflects the people I’ve interviewed with my media work over thirty years.

My interview with retired Australian SAS Warrant Officer Dr Brian Day, who served with the US Special Forces in Vietnam and Cambodia. He was also a founding member of the Australian Vietnam Veterans Association. I interviewed him in 1992 on Anzac, Racism, and the Madness of the Vietnam War.

My interview with Stan Goff, a retired US Army Special Forces Master Sergeant and Vietnam Veteran who served in the US Army up until Haiti in 1996. He became involved in Military Families Against War that was formed when George W.Bush invaded Iraq in 2003.

My question to Veteran Journalist, Writer and Filmmaker John Pilger, at a public meeting in Katoomba, in the Blue Mountains about history being memory in 2008.

My question to Activist, Academic, Writer and Linguist Noam Chomsky, and coverage of his Sydney Press Conference, when he visited Australia in 1995, campaigning for an independent East Timor, then under the murderous Indonesian Occupation.

A shared history in another way too, I argue here that Australia’s Frontier Wars against our Indigenous Peoples should be recognised in the Australian War Memorial.

I also argue against former prime minister Tony Abbott’s $90 million dollar John Monash Centre at Villers-Bretonneux, France and highlight the $400 million spent on the Centenary of Australia’s involvement in World War One as a major act of hypocrisy, when one in ten of our nation’s homeless are War Veterans.

This book is also an attempt to answer that big question, why has Australia been at War so much in so many places normally as junior partner to Britain or the United States?

About the front cover photo

The picture is of the grave of the boy I'm named after, note that word boy, not man John/Jack Tognolini, Military Medal, Killed in Action on 25th April 1918 at the Second Battle of Villers-Bretonneux in France, in World War One. The army had his age as 24 years old. As he was born in 1900 he was either 16 or 17.