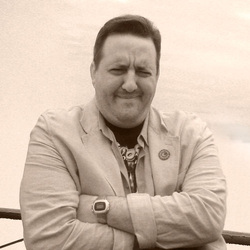 J.I.Greco -- science fictionalist, aspiring reprobate, and gentleman curmudgeon -- writes and doodles hunkered deep underground in a psychic-proof bunker while his wife, son, and indentured cats blithely frolic on the surface above in the post-apocalyptic wasteland that is southwestern Ohio. Rumors that he is a Writerbot Model 9000 have never been fully disproved. 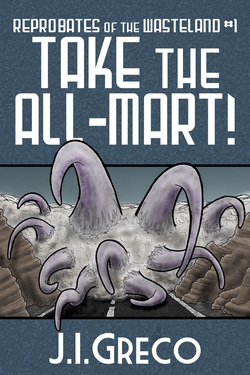 Cyborgs Trip and Rudy roar into the Wasteland in their two-hundred-year-old mind-controlled Dodge hoping to escape the wrath of a jilted warlord queen and end up having to take on a sentient, zombie-filled, world-devouring department store for the love of a sexy, orgy-loving cyber-chick. And for a reward. Okay, mostly for the reward. 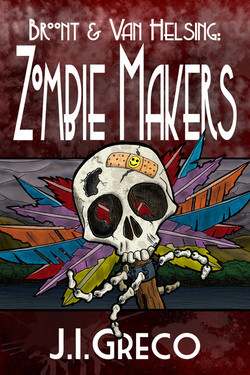 Making a better zombie isn't all drudgery... you do get to kill people. Mad scientists Reginald Broont and Billy Van Helsing won't let anything keep them from creating the perfect zombie: Not jobs as summer camp counselors, the criminal justice system, mechanical sharks, Swiss agitprop, an alarming lack of athletic skill, or even ninjas. Especially not ninjas. 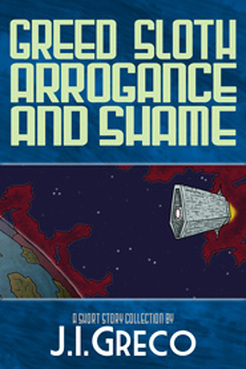 Near omnipotent tyrants returned from the dead. Cyborg ennui. Undead lawyers and polygamist cannibals. Human brains in alien pets. Alien invasions through capitalism. Self-dissection and pleasure nanomachines. Slave-owning robots. Squirrels and pigeons at war. All that and more in ten darkly comic science fiction stories of greed, sloth, arrogance, and shame from J.I.Greco, the author of Take the All-art! This 57,000 word short story collection contains the stories: Mondo Heetze, American Suicidal, When the Squirrels and Pigeons Had a War, Edgy and the Void, The Creditors, Salona Rex, Second Unit, Dissecting Henries, Helmet Time, and the Road to Senility.

Kindle at Amazon.com
NOOK at Barnes&Noble.com