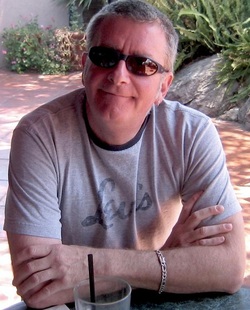 Born in New York State, author Jeff Lee was raised in the San Francisco Bay Area and has spent his entire writing career in Los Angeles.

For more than thirty years he has been a copywriter and creative director for some of the advertising industry’s most recognizable agencies, winning numerous awards for his creativity. Unfortunately, none of those ad agencies are still in business, but Jeff appears to have an alibi.

Trained as a cook in the Army, he still enjoys being creative in the kitchen and admits that few things in life compare with the thrill of discovering you have just given a nasty case of food poisoning to 140 heavily armed men.

Jeff lives about halfway between Los Angeles and Santa Barbara, in a house he shares with his two sons and a cat that’s part golden retriever. 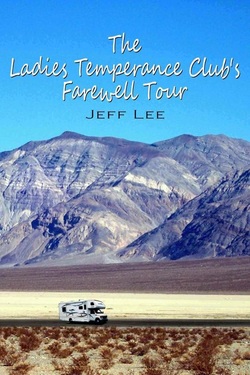 VONDA, KAY and LOUISE are good friends, all empty nesters, who find themselves careening all over the western US in a 39-foot motor home. They’re on a Chardonnay-fueled quest to find the perfect place to bury the body of JACK THIBIDEAU, a larcenous, impotent, alcoholic, bitter and bitterly anti-social son of a bitch and Vonda’s boyfriend.

He’s spent the past couple of decades emotionally and psychologically grinding Vonda down to a shadow of her former self. That is, until the night a heady mixture of hopelessness, alcohol and rage drives her to crush his skull with one of his fraudulently obtained high school football trophies. Unwilling to let their friend have to pay the price for “taking out the trash”, Louise and Kay stuff Jack’s body into a freezer in the underside of Jack’s RV and the three take off in search of the ideal place to plant him.

First stop is an outlet center about a hundred miles down the road, where Vonda suffers a loud, dramatic meltdown at the hands of a troupe of animatronic Howler monkeys and a gigantic rubber tarantula.

From there, their quest takes them across California and into Nevada, Arizona and Idaho. And with the help of huge quantities of Chardonnay, they experience a series of hysterical encounters and run-ins with everyone and everything from a concrete Tyrannosaurus Rex, Vegas casinos and Area 51 to Air Force security, UFO freaks, Charles Manson’s long lost evil twin, an elephant loving former Special Forces grunt and his Icelandic speaking cousin, a toothless Maitre D’ and a pair of well hung ceramic planters.

And without even realizing that they’re being pursued, while our three heroines and their solidly frozen stowaway are caroming over, under, around and through the Interstate Highway System they also manage to inadvertently and narrowly evade a trio of heavily tattooed, graduate degree sporting bikers and part-time ‘repo’ men, hired to repossess the motor home, since prior to becoming the late Jack Thibideau, he was six months behind on the payments.

By the end of their journey, Louise might just learn how to let go of the ghosts and painful past that helped make her the force of nature she has become; Kay may find out that divorcing her Star Trek obsessed former husband doesn’t have to mean closing the door on love; and Vonda could even end up with a pair of life-changing lessons on her value as a human being and the lengths good friends will go to look out for one another. Not to mention all the other lessons they each learn about trust, loss, love, swearing, hangovers, classic Rock ‘n Roll and male motivation.

Just picture Thelma & Louise, on the road with Lucy & Ethel.