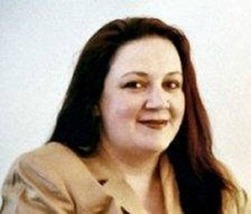 Jacqueline L. Landry was born in Houston, Texas and grew up along the Texas-Louisiana Gulf Coast. She showed a talent from a young age for writing, drawing and music. Early literary influences included Frank Herbert, Colleen McCullough, Jack Kerouac, and Robert Heinlein.

She attended Parkland College in Champaign, Illinois, and the University of Houston, earning a degree in Criminal Justice with minors in Pathophysiology and Psychology. She is a trained death investigator. She has also had a number of jobs that include medical records clerk, graphic artist, web developer and a short stint in the U.S. Navy.

She's spent the past twenty-seven years as a freelance writer and journalist. She started her career as a newspaper and magazine features reporter, specializing in the arts and entertainment. She also worked as a foreign correspondent for Reuters Wire Service while living on Guam, covering the arts and politics.

Over the River, Through the Woods is her debut novel.

Over the River, Through the Woods