Jim Sandoval was a long time political blogger. Growing tired of the growing insanity on both sides of the aisle, he turned his talents towards fiction. His first medieval adventure / fantasy novel, Blood Of The Righteous - Book 1 of the Ki Kalendeen Chronicles, was released in March of 2012. Seven books planned in the first series, followed by a trilogy set in the same world.

He lives in Pittsburgh with his wife and son, and their Brobdingnagian 90 pound Basset Hound, Flash.

Blood Of The Righteous - Book 1 of the Ki Kalendeen Chronicles 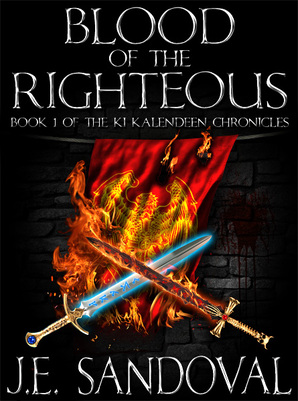 A noble lord is slaughtered in his manor. His three surviving children suddenly find themselves commoners. The oldest, Gabriel Ki Kalendeen, is a knight in service to the church who must balance his commitment to God with his responsibilities of his family. Eleenia, an independent minded healer, tries to make her way in a in a male dominated society in a profession that permits few females to enter. The roguish David, having survived the attack on his family, takes on a new identity, convinced that he is still a target. Together they struggle against society, their own deep character flaws, and the evil that secretly manipulates the world through intrigue, deception, lies, and murder. But the Sons of Perdition knew not what they did when they spilled the Blood of the Righteous!