Born in Kentucky I grew up in the Detroit suburbs. I would sometimes spend a week or two, once I spent six weeks, in Kentucky, staying with cousins or with my grandparents. It was an entirely different world for me, providing some of the best and worst times of my growing up years. I had a great time on a dairy farm with several of my cousins, milking cows, hoeing tobacco, running over the hills and up and down a creek that surrounded the big farm. I remember too, periods of abject boredom, sitting around my grandparent's old farm house with nothing to do but wander about the red clay yard or kill flies on my grandmother's screened-in back porch.

Certain aspects of these growing up years did come to light in the novel, Then Like The Blind Man: ORBIE'S STORY, knowingly at times, and at times spontaneously and distantly, as ghostly north-south structures, as composite personae, as moles and stains and tears and glistening rain and dark bottles of beer, rooms of cigarette smoke, haylofts and pigs.

Cormac McCarthy, Toni Morrison, James Baldwin, Pete Dexter, Carson McCullers, Raymond Carver, Flannery O'Conner and Joyce Carol Oats, to name a few, are among my literary heroes and heroines. Tone and style of these writers have influenced me in ways I'd be hard pressed to name, though the discerning reader might feel such influences as one word follows another and I attempt to "stab the heart with...force" (a la Isaac Babel) by placing my periods (hopefully, sometimes desperately)"...just at the right place." 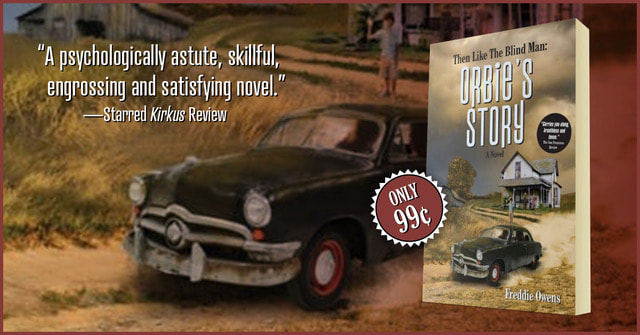