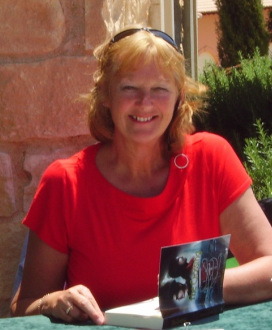 Faith Mortimer: born in Manchester and educated in Malaysia, Singapore and England. I’ve spent an energetic life raising a family, working as a Registered Nurse, Yachtmaster, gaining a Science Degree (Open University) before I took up writing. So far I have  completed six novels and an anthology of short stories. My latest novel, (with my editors), Camera Action…Murder! Is the 4th in the Diana Rivers Series and will be published late summer early autumn. I spend my time between Cyprus and Great Britain.

The Diana Rivers, mystery suspense and murder series include: The Assassins’ Village, Children of the Plantation, The Surgeon’s Blade & Camera Action…Murder!

My romantic suspense novels include: The Seeds of Time, Harvest and my WIP, A Very French Affair.
FaithMortimerAuthor.com      Twitter      facebook

The Seeds of Time - Book 1 of The Crossing 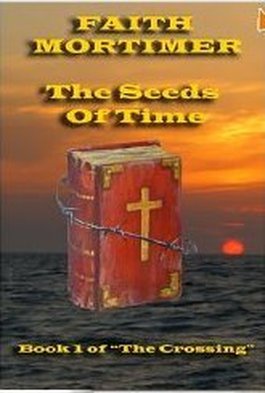 A complete re-working of the novel originally published in paperback as "The Crossing", with additional storylines and chapters, now issued exclusively as an eBook.

This intensely romantic yet realistic novel spans two generations and the unimaginable gulf between the Second World War and the present. When Englishman Richard Barker suffers a devastating loss he learns to come to terms with his grief. He is helped by two beautiful women, newly discovered quiet and smouldering American, Sorrel and the tempestuous and wilful, Miranda an old flame from long ago. While Richard is battling with his feelings, by chance he enters into the dark, often surreal world of his dead father’s past life spent during the Second World War. It is Sorrel's Grandfather, an American Air Force pilot, who contacts Richard with some intriguing news which helps Richard to his senses.

Richard lives in a world that is sometimes as tragic as A Farewell to Arms and as sensuous as The English Patient. His story and that of his father are crafted from the ruins of war and the indestructibility of love. The action is non-stop, the locations are intriguing and the characters are appealing. There is tension, romance and harrowing escapes all woven within a story that captures the imagination and keeps the reader guessing until the very end. Will Richard find inner peace and love?

Harvest - Book 2 of The Crossing 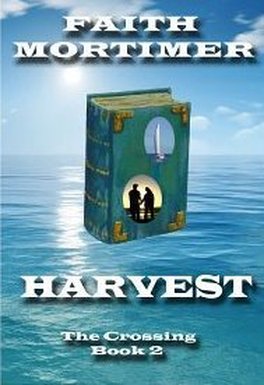 HARVEST - Book 2 of The Crossing - continues Richard and Billy's stories which begun in Book One, The Seeds of Time. Billy returns home and marries his love, while Richard realises he has to make a decision between the two beautiful women in his life, Sorrel and Miranda. Richard discovers he is torn between love and duty.

In Sorrel he finds what he believes is his soul-mate, whereas sexy Miranda keeps Richard guessing when she lets slip secrets deep within his father’s past. When Richard discovers an old war-torn photograph of a woman and two children he finds his roots are shaken to the core. What was it his father did and never divulged to his wife and family? Harvest is finding fulfillment in a world where tragedy rests alongside joy. Harvest talks about harsh, cruel, and often despicable conditions – at the same time describing the indestructibility of love in both past and present lives. This is a story of deep romance, bravery, determination, survival, heartbreak and happiness, all poignantly and convincingly conveyed. Richard's compelling desire to finally lay his father’s dark secrets to rest brings warmth and understanding into the two intertwined stories. All perfectly blended with non-stop action, intriguing locations, and appealing characters.

Review snippets from The Seeds of Time, Book one.

Isn't it comforting to pick up a book by a favourite author and have confidence that you are going to enjoy their book? Faith is one such author. My confidence is always justified…This was a departure from her other books I've read, which feature her glamorous amateur sleuth, Diana Rivers. This was quite, quite different and represents the diversity of talent Faith has…
***

I received a copy of this book in exchange for an honest review, and I'm so glad that I accepted. After suffering a devastating loss, Richard Barker comes to terms with his grief with the help of two beautiful but vastly different women. Dark and compelling, The Seeds of Time is a must read.
***

Faith asked me to read The Seeds of Time, which is a rewrite of The Crossing. I was a little hesitant because I already knew the story and thought how can you better a gripping story? Wow and I mean WOW! I should not have worried because the new chapters and the changes have made it a more powerful story. I really felt that I was there with Billy and Nat in the POW camp. I also like how the book ends; you just want the next book so that you can carry on with the story.
***

You'll find Faith Mortimer's new book absolutely delightful. She has picked up on her strength and talent for exploring the state of ever-changing, ever-fascinating human condition and capacity for emotional growth to produce a veritable masterpiece.
***

I loved the drama and intrigue which ran right through the story and the way in which the two generations connected. The story flowed beautifully and I thoroughly enjoyed reading about the main characters and how they overcame their trials and tribulations. There was a little bit of everything in there. Definitely a "must read"
***

Faith Mortimer is best known for her Diana Rivers mysteries. Here she shows us another side with an involving story of two generations wedded to the sea. Richard takes on the challenge of crossing the Atlantic with a small crew. Billie, his father, served in WW2 in Motor Torpedo Boats and was captured as a prisoner of war. Their two intertwined stories are told with great warmth and understanding.

What I think is particularly notable - and what is true of all of Faith's writing - is the great talent she has for description as well as story-telling. In 'The Seeds of Time', this is revealed in the wonderful, vivid descriptions of the peril and beauty of being at sea with all the dangers this involves. I can easily recommend 'The Seeds of Time' to anyone who enjoys a truthful story well told.
***

Children of The Plantation 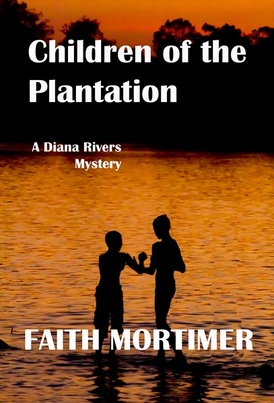 
After discovering the truth surrounding the bloody murders in, “The Assassins’ Village”, our sexy, feisty sleuth and heroine, Diana Rivers and her partner Steve, decide they deserve a holiday. Trying to relax at their luxurious palm fringed plantation hotel in lush, tropical Malaysia; things don’t quite work out as they imagined.

Diana is approached by the hotel owner, the enigmatic Miss Chalcot, well-bred, imperious and secretive, to take a look through some old family documents. Miss Chalcot possesses a burning ambition to put right a dreadful wrong that occurred over forty years ago – and Diana is given free rein to pursue the mysterious past of the family and discover what lies behind the dark stories.

Diana enters into a world of the 1950’s and 1960’s, where lies, deceit, illicit love, jealousies and perhaps murder all feature.

What really happened all those years ago? Who were Paul, Hermione and the beautiful but selfish Eleanor? Who was responsible for events that shocked the whole family and plunged it into despair? And what is the real story behind the façade?
Will Diana triumph against all odds yet again?

I challenge you to guess before the final curtain. 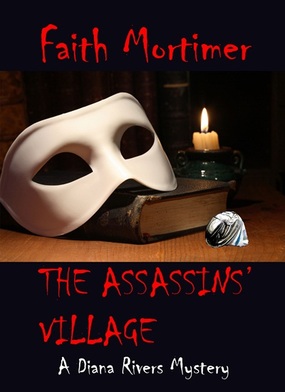 Bound and gagged, the shocked and terrified victim recognises his assailant. Days later, another body is discovered. How many assassins stalk the village?

In a picturesque Cypriot village an expatriate theatrical group gather to discuss their next play; but when the curtain rises it’ll be murder.
A blackmailer stalks the cast – a group riven with jealousies, rivalry, sexual tension and illicit affairs.

Unbeknownst to each other they all attempt to find solutions to their problems. Some believe it lies in murder. Can they find the blackmailer? And can they find that all important ‘little black book’ – the chronicle of their misdeeds.

When a body is discovered, Diana, a cast member, turns detective to draw up a suspects list. After the police get involved one of the suspects is found hanged - another murder or the suicide of a guilty person?

A visit to a villager’s home uncovers an ancient assassin’s weapon. Could this be the murder weapon? Is it possible that an assassin lives at the heart of this formerly peaceful and idyllic village?

Love, hate, murder and high drama all feature in this classic historical detective story. With a long list of suspects, some dramatic twists and the odd red herring, the reader is left guessing until the final curtain falls. 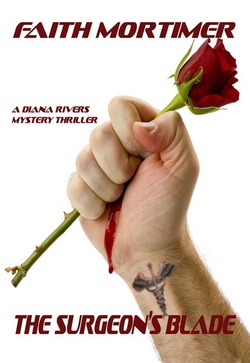 Mystery-suspense-thriller writer, Faith Mortimer is delighted to add book three to the best-selling Diana Rivers mystery thriller series. This latest novel, “The Surgeon’s Blade” is chilling, tense and is described as a ‘real corker of a read and probably the best in the series’.

When nursing sister, Libby Hunter wakes up in hospital following a traumatic sailing accident she discovers two deeply disturbing things. One - she has lost her memory and two – the stranger, (Nigel) whom she finds sitting by her bedside when she awakens claims to be her fiancé!

During her hospital stay, Libby regains most of her memory, except the bizarre fact is she cannot remember EVER being engaged to surgeon, Nigel. Against her will Nigel persuades Libby into agreeing to move in with him. Working on instinct she finds every excuses to put him off until she is completely sure of her true feelings.

During a series of attacks on nurses in London and Southampton, Libby finds herself in great danger when her home is broken into one night. Who is the intruder and does he plan on harming her? And is this connected in any way to the recent attacks on nursing staff. Will Libby be the attacker’s latest targeted victim?

Distressed Libby turns to pilot, Robert for help and understanding, but is he as respectable and kind as he appears to be? Is her so-called fiancé, Nigel trustworthy, especially when his ex-wife, Stella enters the scene and Libby suspects them of rekindling their relationship?

The night time intrusion to Libby’s house sets in motion a downwards spiral of cataclysmic and terrifying events, culminating in our favourite sleuth, Diana Rivers stepping in to help solve the case in this chilling mystery thriller. 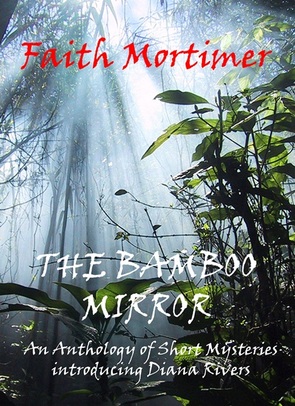 AN ANTHOLOGY OF SHORT MYSTERIES ~ suspense/ghost/romance

Mystery-suspense-thriller writer, Faith Mortimer warmly welcomes you to her short story collection, “The Bamboo Mirror” (previously published as “Echoes of Life and Love”). In three of the stories the reader is introduced to sleuth, Diana Rivers who features in Faith’s mystery thriller series. In “The Bamboo Mirror” each story has a unique setting, always with a twist in the ending.
Book Description

“The Bamboo Mirror” – Set in a 1960's Singapore boarding school, new girl Diana Rivers (The Diana Rivers Mystery Books) has an encounter with two mysterious children - Who are they? Mystery, suspense, ghost story.

“The Cast Party” - The lovely Linda, aspiring actress, has a devious plan. Will she be able to carry it out? Mystery/love

“Making A Right” - Sometimes two wrongs can make one! Retribution and suspense

“Rebecca With Two C's” - A poignant ghost love story. What is real?

“Summer Visitors” - Has Alex made the right decision? Is real life like this? Romantic suspense.

“Widow’s Weeds” – Maria visits her birthplace, Cyprus and meets Christos. After a whirlwind romance they get married. As time passes wealthy Maria questions herself. Has she made the biggest mistake of her life? If so, what will she do? Mystery suspense & murder.