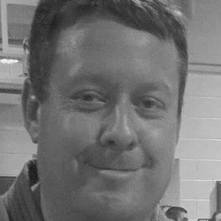 Eric Lahti grew up looking for UFOs and buried treasure in northwest New Mexico. Unfortunately, he never found either of them. Or maybe he did and he's just not telling. He did find some good stories to tell at parties about lights in the skies and gold in the ground, though.

When he's not writing, he's programming and practicing his Kenpo. He's also an active blogger, waxing philosophical about a range of topics from writing, to martial arts, to politics and religion. Frankly, he fancies himself something of a Renaissance geek about a wide variety of things.

Eric is the author of the ongoing Henchmen series (Henchmen, Arise, and Transmute) as well as a collection of action/horror novellas about a man and his talking gun. He also has a collection of interlocking stories called The Clock Man that are a great introduction to his writing.

His writing is a seamless mixture of action, adventure, horror, and humor. Eric's latest project - Greetings From Sunny Aluna - is a fusion of detective noir, wuxia, and magical realism.

He's currently working on a story involving a ghost, a dark stranger, a pair of ghost hunters, and a mysterious desert mummy.