What the Bible Says About the Sacraments

How to Write Clearly: A Guide to Effective Communication

The Theory of Knowledge: A Jargon-Free Guide to Epistemology

Righteous in Christ: Daily Meditations on the Heidelberg Catechism

What the Bible Says About the Future

What the Bible Says About Salvation and the Sovereignty of God

I Bleed Cubbie Blue: My Six Decades as a Cubs Fan 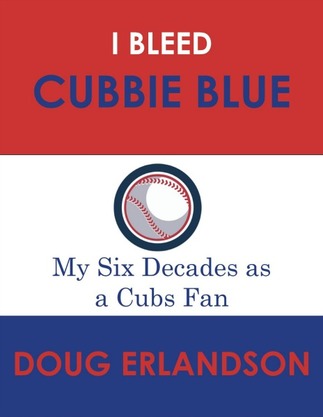 Experience It for Yourself. 60 Years of Cubs Love.

You are about to enter the world of a lifelong Cubs fan.

Combining personal memories and reflections with meticulous research, native Chicagoan Doug Erlandson describes his affection for a team that has raised but ultimately crushed his hopes countless times, a team to which he remains intensely loyal after nearly sixty years of fandom.

Beginning with a description of the first game he attended in 1954 (a loss to the New York Giants), he weaves highlights from every season from the late-1950s through 2012 with detailed descriptions of significant games, front-office follies, trades, as well as the individual players who toiled in a Cubs’ uniform during this period.

I Bleed Cubbie Blue provides often humorous, sometimes tongue-in-cheek, but always accurate commentary on P.K. Wrigley’s college of coaches, the collapse in 1969, why Leo Durocher was a great manager (and why he was not), the lean years of the Seventies and early Eighties, the wonderfully giddy year of 1984, the improbable divisional championship of 1989, why Kerry Wood’s fifth Major League start was the greatest pitching performance ever, why Steve Bartman was not to blame for the Cubs’ loss in the 2003 playoffs, and much, much more.

Along the way I Bleed Cubbie Blue describes bizarre plays (such as Cal Neeman’s unlikely inside-the-park homerun when Bob Skinner forgot what inning it was), the tragic death of Ken Hubbs at age 22, the pitcher who claimed he pitched in a hypnotic trance, Jack Brickhouse’s call of an around-the-horn triple play (before it happened!), the unintentionally funny moments with Harry Caray in the broadcast booth, and the most memorable performances by guest conductors during the seventh-inning stretch.

The Problem of Evil: A Biblical Perspective

How to Think Clearly: A Guide to Critical Thinking

Battle for Control: A Memoir of Anorexia, Exercise Bulimia, and Other Compulsions

Philosophy of Religion Basics: A Jargon-Free Guide for Beginners

The Making of a Christian Counterculture

Bearing Witness: Sharing the Gospel in a Post-Christian Age

For the Love of Licorice: Licorice Lovers Share Sweet Memories

Godly Contentment: Kingdom Living in an Age of Economic and Social Uncertainty

Spiritual Anorexia: How Contemporary Worship Is Starving the Church