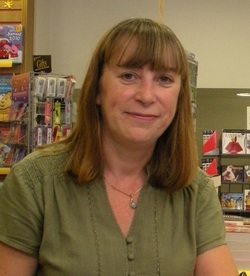 Diana Jackson has written stories and poems all her life, but had her first novel 'Riduna' published in May 2009. It has only just been launched as an e book worldwide(summer 2012)and a new edition of Riduna has recently been launched by Eventispress, a publishing company she has established herself using experienced people and services to give a professional approach and finish.

Her next novel, 'Ancasta~Guide me Swiftly Home,' was released this summer as a paperback and will follow as an e book during the autumn of 2012.

When not writing Diana teaches English and Business Studies part time to 16 to 19yr old students, which keeps her on her toes! Relaxation for Diana is gardening, often eating the produce of her labours, or following her husband's rock and roll band.

Diana is motivated by her passion for social history, allowing for her research to guide the lives of her characters, who become as real to her as her own life. 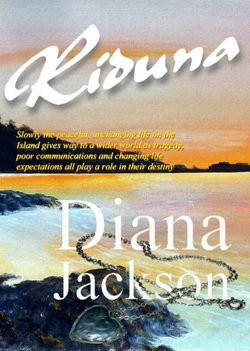 “Riduna speaks volumes about the power of love and loss and is beautifully written with a fluidity that speaks to your soul. Author Diana Jackson’s ability to portray the everyday ordinary yet life-changing events of those in a community is amazing; you get a true feel of what it must have been like living in Riduna during that era. Fans of The Guernsey Literary and Potato Peel Pie Society will fall in love with Riduna.” Historical Novel Society Review August 2010

Riduna is the Latin name for the unique and picturesque island of Alderney, sister island to Guernsey Channel Islands, UK. This is the first novel in the 'Riduna Series,' set in the late 19th Century. For Harriet, who was born on Riduna in 1866, and many others in her community, the island seems to be a character in its own right. It is the only world they have known, or wanted to know. On the other hand, Edward lives with his head full of dreams of distant shores. As their destiny is challenged, will their devotion remain constant?

Riduna tells the story of Harriet and Edward as they move towards adulthood, when conflicting dreams, tragedy and poor communications all play a role in their lives.

Do you ever feel that your very reason for being alive is threatened?

Have you ever loved someone so much that you have let them walk away?

Have you experienced displacement, daunted by moving away to somewhere unfamiliar, and yet deep within your heart is the very place you have left behind, a place you once dared to call home?

A twitter follower born on Alderney but now living in Canada once tweeted:
‘You can take the girl out of the island but you can’t take the island out of the girl.’ 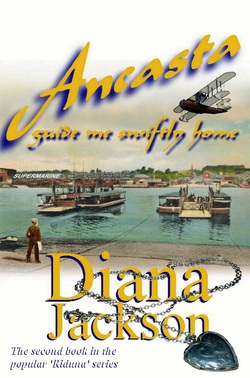 The lives of Harriet’s family and friends are interwoven seamlessly through 1910 to 1920, as history comes to life through the eyes of the characters. It is a tale of endurance and hardship through the Great War, contrasted by the excitement of the birth of Supermarine, early flying boat production and The Schneider Trophy.

Hints of character traits formed in early childhood appear to guide the destiny of the menfolk as they play their part in the less well known facets of World War One, but the roles of the womenfolk, too, change beyond recognition.

As we head into 2013 three important centenaries are reflected in Ancasta:

Why Ancasta? The River Itchen, important in Roman Times when Southampton was already a strategic port, was allegedly blessed by the Goddess Ancasta to whom the Romans prayed for the swift and safe return of their vessels. So true also during the Great War as Harriet looks out over Southampton Water and waits for news.

Will each member of the family return safely from the war which takes Harriet’s sons as far away as Turkey and India?

Will the roles of women, especially Harriet and her headstrong daughter Sarah, empowered by the daunting responsibility of their loved ones so far away, change their lives forever?

Will the island of Riduna,(the beautiful island of Alderney in the Channel Islands) so deep in Harriet’s soul, continue to caste its magic over Sarah too?