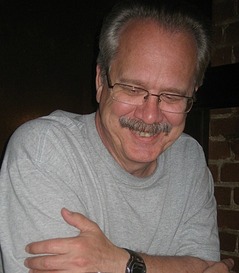 I'm originally from the United States, but moved to the United Kingdom in 1987. I've been an educator, public speaker, world traveler, consultant and writer. Over time I accumulated degrees in psychology, anthropology and theology. I read widely – philosophy, theology, history, politics, narrative theory, theater and film theory, and in recent years I’ve been interested in the development of robotics and cyberspace. And I’m always reading fiction, from the popular to the literary. I’m a big fan of Philip Roth, Toni Morrison, Chuck Palahniuk, Zadie Smith, Kurt Vonnegut, Barbara Kingsolver, Roberto Bolaňo, Haruki Murakami, Margaret Atwood, Julian Barnes, and Joyce Carol Oates – to name a few.

Through the years I’ve traveled widely for a varieties of reasons. I stood on the Berlin Wall New Year’s Eve 1989 when 500,000 people welcomed in the new decade and the liberation of the once Soviet states. I was in South Africa for the first fully democratic election and stood in line for hours with black South Africans as they voted for the first time in their lives. I was in Northern Ireland at the time of the Good Friday Agreement visiting both Unionist and Republican areas on opposite sides of the Peace Wall. I can’t remember the number of countries I’ve visited, but I’ve been around the world a few times. Much of my travel was associated with work, and most of it meant visiting areas of extreme poverty, but not hopelessness. I worked with local people in creating international partnerships, developing educational programs, establishing sustainable micro businesses. Can’t tell you how many great people I met along the way, everyone doing their best not just to survive but to thrive.

After almost thirty years I've moved back to the United States and now live in Seattle with my wife, Roberta.

The Woman in White Marble