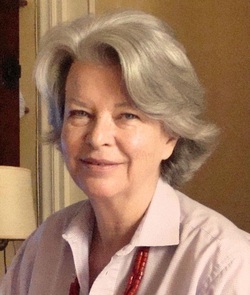 Born in Brussels, brought up in Europe, Africa and America, Claude Nougat is a Columbia U. graduate in economics. In her busy working life, she followed in Jack London’s footsteps and dabbled in a range of jobs from banking to publishing, journalism, marketing and college teaching before joining the United Nations in Rome (FAO, Food and Agriculture Organization). Here, after 20 years of service as a project inspector, she was promoted and ended her career as Regional Representative (Director) for Europe and Central Asia. She retired in 2003.

Claude is the author of many books, including two in Italian that won several awards in Italy, and seven in English, all fiction except one essay on development aid. Her most recent book is a romance, "Crimson Clouds", exploring the complexities of mature passion and the challenges of post-retirement life, the so-called "second adulthood". Claude is considered a prime exponent of Boomer literature aimed at Baby Boomers and has founded a group on Goodreads (500 members to date) to discuss Boomer Lit.

Her poetry has been included in "Freeze Frame", an international poetry anthology curated by British poet Oscar Sparrow, published by Gallo Romano Media in 2012.

Claude is married and lives in Italy.

You can find her on Facebook, Twitter, Google+, Pinterest, LinkedIn, Shelfari and Goodreads. She is a regular contributor to Publishing Perspectives and Impacter and maintains an active, highly-trafficked blog. 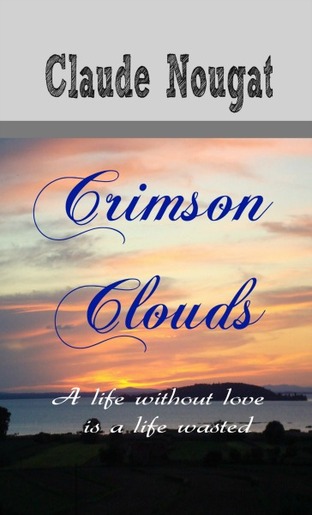 Romance the second time around. A passionate search for self by a man who has just retired from a brilliant career, a desperate effort by his wife to save their 20-year marriage: a life with no love is a life wasted.

Robert, just retired from a brilliant career as a UN manager, pursues a childhood dream of being an artist. His academic paintings dismay his wife, a lover of Contemporary Art. They fight over art, he’s square, she’s cool, but what threatens their marriage is a secret she has never revealed. They separate, he goes to live in Italy, she stays in New York. Other women enter his life, Natasha, a fiery childhood friend who’s become an affirmed art photographer and her daughter Noor, young, beautiful and deeply troubled. He discovers passion but true love and happiness still elude him. His wife returns, attracted by one of his poetic doodles “Crimson Clouds…roll in the sky…the memory of a lost love lingers on”. Can she regain that lost love?

This novel explores the wistfulness of mature passion and the complexity of self-discovery after a lifetime of work. 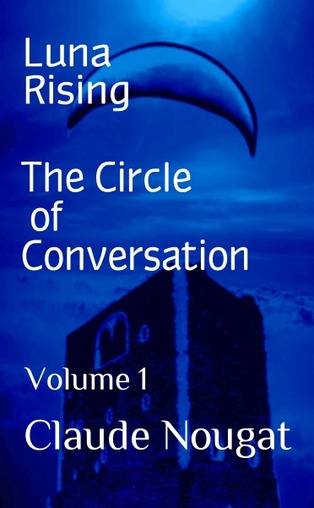 Life is a game of cards, you need an ace to win.

Born a "gifted child", Tony Luna is a whiz with computers and at fifteen he is a successful video game engineer. Four years later, he suffers from burnout. He sets off to Sicily, the homeland of his long-dead father, the descendant of a once powerful family, the Lunas, whose fortune vanished in the early 1900s. In the old town of Syracuse, he wanders into an abandoned palazzo filled with people in disguise, but this is no costume ball. They are the ghosts of his ancestors – among them, a beautiful woman with deep, black eyes that promise love. The door slams shut behind him, Tony is trapped. The woman approaches him. She has mistaken him for her long-lost lover. Is love between them possible? This is the start of a long and dangerous voyage of self-discovery as Tony learns about his doomed inheritance. Can he shake off the past and make a success of his life or is he destined to failure like his father? 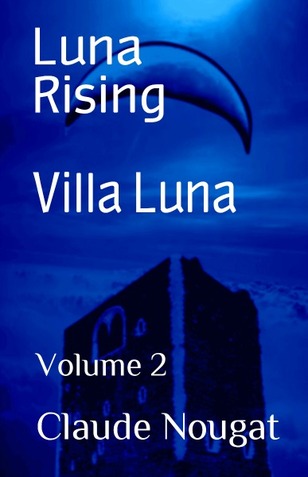 Tony Luna falls back in time and discovers the tragedy that befell the House of Luna in 1908; can he change the family destiny? 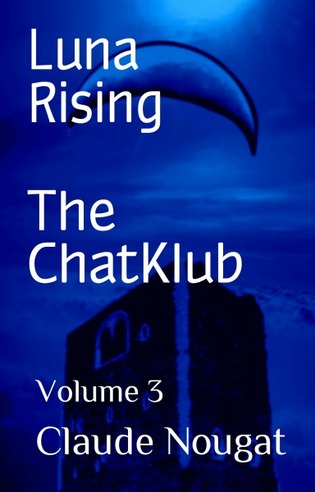 Tony Luna battles the odds to conquer the woman he loves and defend his start-up from the greed of the Sicilian and Russian Mafia; can he shake off the past and catch the future?

Death on Facebook, Short Stories for the Digital Age 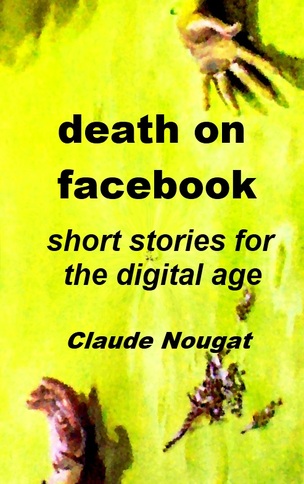 An innovative take on storytelling: short stories for the digital age. All eight stories in this collection are recent and firmly anchored in our fast-changing, globalized world where what happens in Iraq or India feels like it has happened next door. Innovations from the Kindle to smart phones and video games have changed the way we live.

The stories can be funny or sad, even tragic, and always end with an unexpected twist. For each one, Claude Nougat gives a quick hint of what inspired her:

Death on Facebook: culture clashes or how an innocent picture posted on the world’s largest social network can have deadly consequences. (Story set in India)

Wickedness on Wikipedia: when an excess of information comforts prejudice and leads to irrational behavior and tragedy.(Setting: France)

Diary of a 98 year-old Lady: recounted from the point of view of a senior citizen, it records the frustrations of becoming dependent on others, especially in the digital age. (Setting: Italy, Rome)

The Prince and the Art Dealer: the excesses of Contemporary Art or a tale of gullibility.(Setting: An Arab Gulf State)

Kill Mamma: when parents’ unrealistic expectations for their children become like the walls of a prison and the only escape is murder. (Setting: Italy, Parma)

The Ice Maker: unexpected and tragic fallouts of a war when the occupying power belongs to another civilization. (Setting: Iraq) 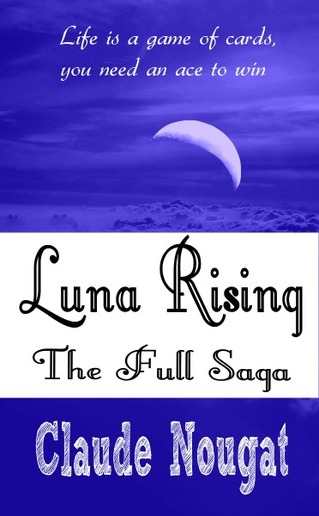 This 130,000-word "full saga" includes ALL THREE BOOKS of the Luna Rising trilogy. Save over 40% versus buying the single volumes!

Is it a curse to be too brilliant? For Tony it is. He finishes school at fifteen and dives into a career designing complex video games. By the time he's nineteen, he's burned out like a man three times his age. And he's lonely. He wants out. He yearns for a world filled with real people and not avatars. His father who died when he was a kid used to talk to him about his homeland, Sicily, and how his family, the Lunas, fought many battles in the Middle Ages, making a name for themselves and a big fortune on the way - a fortune that however vanished in the early 1900s, leaving his father penniless.

Tony sets off for Sicily. Walking around the old town of Syracuse, he drifts into a palazzo with a strange name over the door, the "Circle of Conversation”, filled with people in disguise. But this is no costume ball. The Circle is a place out of Time, dark and humid, where the ghosts of his ancestors mill about and converse, waiting for Judgment Day – among them, a beautiful woman with deep, black eyes that promise love. But the door slams shut behind him, Tony is trapped. His trip to Sicily, meant as a simple voyage of self-discovery, has turned into a nightmare. How can he shake off the past and find himself?

NOTE TO THE READER: This is a revised edition (with two new chapters) of a trilogy originally published under the title “Fear of the Past” and subsequently re-titled “The Phoenix Heritage”. When the first book in the trilogy was published in Sicily as a self-standing novel, it met with enthusiastic praise in the local press where it was likened to “dreaming with open eyes through Time” (Pino Nucifora in Diario di Siracusa) and described as “fantastic, surreal, meta-psychical, out of time and reality” (Arturo Messina in Libertà). This encouraged the author to re-write the story in English and expand it to a trilogy. 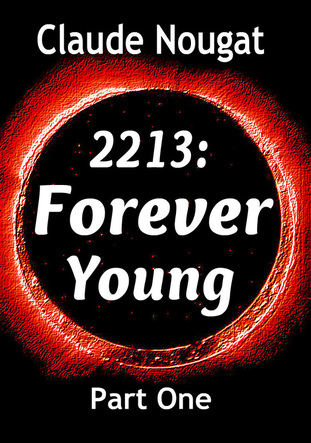 2213: Forever Young is a serial novel à la WOOL, set in a future where the problem of aging has been solved by medical science. The catch: only One Percenters can afford the extremely expensive Age Prevention Program...Part One, called I Will Not Leave You Behind  follows the excruciating quandary of a beautiful woman who's 122 years old and learns her time is up. She's going to die within the next 12 hours...but she's in love with a handsome 99Percenter, a Swiss ski instructor who's a dashing 40 years old and doesn't know how old she is. They are madly in love, he always thought they'd age happily together, but now what?