Carl Thompson and Briana Scott are co-authors of the novel, Jasmine Absolute. Their goal is to write thought-provoking and entertaining contemporary fiction about everyday people.

Carl Thompson lives just outside Atlanta, is married, has two kids, a dog, and a degree in Film and Video Studies. He is a huge pop culture fan--a lover of movies, TV, comics, pro sports and especially music. His iPod has everything from Old School funk, to 80's New Wave, to Jazz, to Classical.

Carl started out trying to write and sell screenplays many years ago, with the goal of putting out the next great sci-fi or action-adventure film or TV show. It failed to satisfy him, and he eventually realized that he really wanted to write something more serious, something that spoke more to contemporary issues. Just as he began looking for a story to tell, he met Briana Scott.

Briana Scott has a degree in Media Communications/Journalism. A combination of elements from her life, including family life, spirituality, faith, relationships, and her eight years working behind the scenes in local television news have put her on the path toward a professional life of creative thinking and writing.

Briana is a native New Yorker, but currently resides in Georgia. She has one brother, two sisters and eleven nieces and nephews. Having been reared by her maternal grandmother, along with the strong influences of her mother's siblings, she's had lots of love, support and guidance along the way. As the saying goes, "it takes a village to raise a child." Briana is looking forward to sharing some interesting stories with you.

Carl and Briana first met about four years ago, and bonded over a desire to write and bring many "untold" stories to life. Jasmine Absolute represents the culmination of years of discussion, about families, human nature and the need to become who we are meant to be. 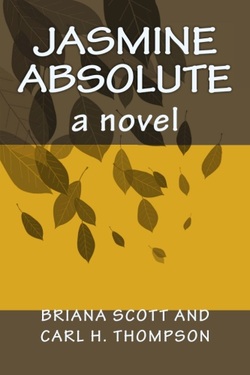 Jasmine Griffin believes she has it all: a blossoming career at one of Atlanta’s most prestigious ad agencies; a passionate relationship with her boyfriend of nine years, Kahlil; and she is hopeful that she might finally have a shot at realizing her dream: to open a community center to honor her slain younger brother. Everything is looking up for her. Until…

An uncle whom Jasmine barely remembers moves in after a near-fatal heart attack; a stunning betrayal costs her her job; and in desperation she turns to the one thing that everyone thought her mother’s death would have taught her to avoid forever: a drug addiction. In this case, meth. As she slips farther into the abyss, she realizes that fighting her way back will be a lot harder than she ever thought possible.

Join Briana Scott and Carl H. Thompson as they take Jasmine on a thought-provoking, sometimes-funny, sometimes-tragic journey to Hell and back, examining issues of pride, economic hardship, drugs, violence, inner turmoil, love, loyalty, and most of all, what it means—and takes—to find one’s true self.

A sample Chapter of Jasmine Absolute