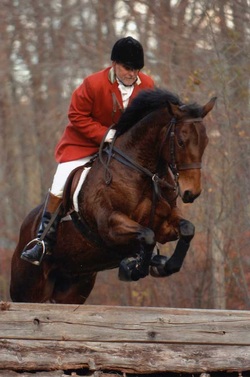 Bill Miller has been riding to the hounds for the over 40 years. For nearly 20 years he has been an honorary whipper-in for the Norfolk Hunt Club. Bill is also actively involved in Team Penning during the summer months. He lives on a small farm in Sherborn, Massachusetts with his wife and three horses. When not working with horses, Bill is an independent film director and cinematographer. 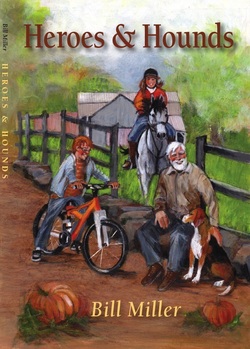 This delightful story is full of excitement and action. The main character, Carly, has all the characteristics of a typical eleven year old girl. She lives with her grandfather, 'Grandpa Oakley' while her parents are in the armed Forces. Her best friends are Freddie, a young lad of about the same age, Buster, her grandfather's cat, and her pony Monroe. Although she was brought up in the suburbs, she has quickly adapted to life on her grandfather's farm and loves living in the country.

The animals in this story are as important as the human characters. They have their own personalities but are not 'humanised' and are written as 'real' animals. Apart from Monroe, there is the foxhound, called Hampton and a wily red fox. The two become unlikely allies - and they and Carly and Freddie become unwittingly involved with an aging Vietnam veteran, 'Strange Willie' rumoured to be half mad and more than a little dangerous. The story moves along at a fast pace, from the beginning of the adventure when Hampton becomes separated from the hunt, is injured and lost to the the thrilling climax when Freddie goes missing and suspicion falls on Strange Willie. Carly, riding Monroe, leads the search party in a desperate chase across country, and Strange Willie saves the hunt pack from a terrible fate.

Apart from being a really good adventure story, with animals and characters that children can easily relate to, there are some good lessons to be learnt along the way, like not making hasty judgements, and that honesty, friendship and loyalty are the things that are really important in life. Altogether a delightful story which any animal loving youngster is likely to throughly enjoy. The beautiful and lifelike line drawings by Mary Burkhardt add even more to the story.