Death of a Flapper 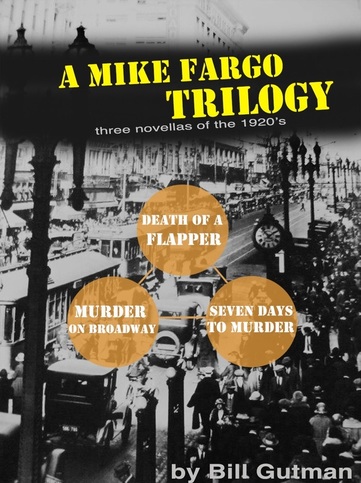 A MIKE FARGO TRILOGY presents three complete novellas in one book. Now it's easier than ever to follow the resolute New York City detective with the take-no-prisoners approach as he navigates the Roaring Twenties, working to solve a trio of cases that try not only his patience, but also his desire to bring murderers to justice. Here's what you get.

Death of a Flapper

Set in 1922, Fargo has to solve the murder of young socialite Marjorie Reems, found dead in a doorway a block from the swanky Park Avenue home of her parents. But why was she dressed as a common flapper, and why did she spend her time with a succession of men, each more sleazy than the one before with several connected to organized crime? Because of her family's status in New York society, Fargo feels pressure from the top to solve the case, and what he ultimately learns will shock 1920′s society as much as it would shock people today.

Young Buddy Barrett has taken 1925 Broadway by storm, the hottest director of musicals to come along in years. When Barrett is shot dead during a rehearsal of his latest show, Fargo must find who killed The Boy Wonder of Broadway. He soon learns that Buddy has been making enemies as fast as illegal booze flows through the city. In fact, he has a second nickname – Buddy the Bastard. On top of that, the guy is a mystery with no record of him anywhere and no apparent past. Fargo must learn who Buddy Barrett really is and why he was killed.

When Fargo is sent to the famed 300 Club in August of 1926 to check on a missing girl he meets the club's hostess, the irrepressible Texas Guinan. She tells him that one of her employees, Brandi Collier, has disappeared. Even though Texas has sidestepped the hooch law on many occasions, Fargo likes her and goes to work. The usual avenues prove a dead end until a stunning phone call changes the entire complexion of the case. Suddenly Fargo is not only racing against the clock, but finds himself in grave danger as he seeks out the girl and the mysterious kidnapper who has her.