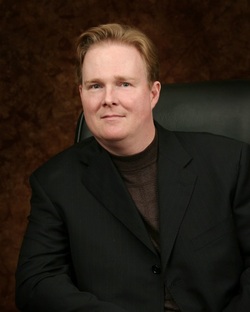 Writer Andy Holloman has been scribbling stories since a young age. (According to reliable sources.) Shades of Gray is his first published novel and grew out of his experiences as a travel agency owner many moons ago. He was fascinated with the true story of a client of the business that was murdered. Suspecting her line of work was drug smuggling, a story sprouted in his over-active imagination - How far would a desperate person go to save their child and their business.

He is the father of three and happily married for 20 years. A graduate of UNC-CH, he lives in the Raleigh, NC area and is busy carpooling, keeping his wife happy, attending school and sporting events. He loves the great outdoors in NC, is an avid reader, and a social media goofball. Most evenings, he can be found tapping on his well-worn keyboard as he “births” his next novel. 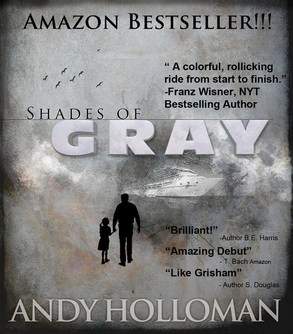 In the Fall of 2001, John’s life has fallen off a cliff. His six- year-old daughter, Lucy, needs a kidney transplant and his Durham, NC travel agency has been wrecked by the events of 9/11. He must find a way to secure a large amount of money quickly in order to pay for Lucy’s surgery. He’s been in tight places before but he’s currently out of solutions.

Wanda, a client of John’s travel agency, has had her livelihood hit hard by 9/11 also. She can no longer transport cocaine via airline flights due to increase airport security. She is a single parent, like John, and has wanted to get out of her line of work for several years. She needs more money to allow her and daughter Tonya, to move from Durham to California and break free of her boss, Jamel.

John and Wanda form a partnership around a plan to smuggle cocaine via cruise ships. His industry knowledge and connections would remove the transportation risks and she could handle the distribution and selling once they brought the drugs back to Durham.
Despite being nearly killed on their first run, it was a financial success. Wanda coaxes John into another trip while Jamel is becoming suspicious of Wanda. John’s half-brother Travis, a Durham police detective battling his own demons, can’t connect the dots between John and Wanda . He continues to line his pocket with ill-gotten gains. Lucy and John are the most important people in his life and he would do anything they asked to help. If they would only ask.

How far should a father go to save his child? Can a man and woman from completely different worlds help each other? Could they fall in love? And which one of these people will live to see the summer of 2002? Find the answers in Shades of Gray, a debut novel by Andy Holloman.