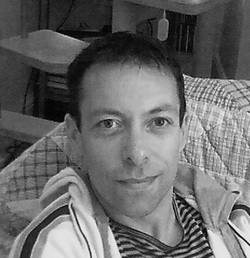 I'm English by birth, from the Isle of Wight, now living in France, in the stunningly beautiful department of Haute-Saône, in the Franche Comté region. It is heavily forested and very tranquil but the winters are pretty harsh and my home is 820 metres above sea level so I get plenty of snow.

I was 49 years old in 2014. I only started writing in 2009, proving, I suppose, that it is never too late. I didn't think about self-publishing until late 2012, now, 20 months later, I'm more energized by the process than ever before.

I'm a qualified English teacher, specializing in teaching English as a second language (TEFL), though I don't do much of that now. In the distant past, I taught software skills. In the very distant past, I was a project manager on big IT projects and at the very beginning of my career, I was an Internal Auditor. I have degrees in "Internal Auditing", "Computer Auditing" and "Project Management". I'm studying for my degree in Sustainable Development at the moment. Renewable energy is what really interests me and I generate my own power at home via a solar panel.

I grow some of my own food, and from Easter to the end of October, I'm outside for the largest part of the day tending the garden. I write in the evening and during the winter when there is very little else to do. I have no great philosophy except "energy follows intention" and "honour your gifts". These two principles keep me sane, very happy and exceedingly busy!

The Shell & The Granite Pearl

The Map Stick - the first journey

The Weaver & The loom - complete