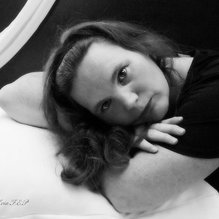 A.E. Hellstorm was born in Sweden, but spent several years of her youth in Portugal and Greece, before returning to Stockholm, her city of birth.

As a young adult she took a diploma in Creative Writing, as well as a Master of Arts in Scientific Archaeology. In 2005, she and her husband moved to Canada together with their cats, and have lived there ever since.

In Canada she took a diploma in Arts and Cultural Management, and in Photography. She opened her photography business Flying Elk Photography in 2012.

'In the Hands of the Unknown' and 'Lost' are her first published novels, but she has had a play, 'Marsvindar', staged at Rosenlundsteatern in Stockholm, Sweden, in 1992, and she has also participated in two anthologies: 'Karbunkel' in 1994, and the '2014 Wyrdcon Companion Book'.

Other than that she is a vivid roleplaying enthusiast, and she was deeply engaged in the Swedish larping community during the 1990’s and early 2000’s. In the year of 2000 she organized the Greek mythology-based larp 'The Song of Mycenae'.

When she doesn’t write she enjoys curling up in a recliner with a book, her cats, and a large cup of tea.

In the Hands of the Unknown